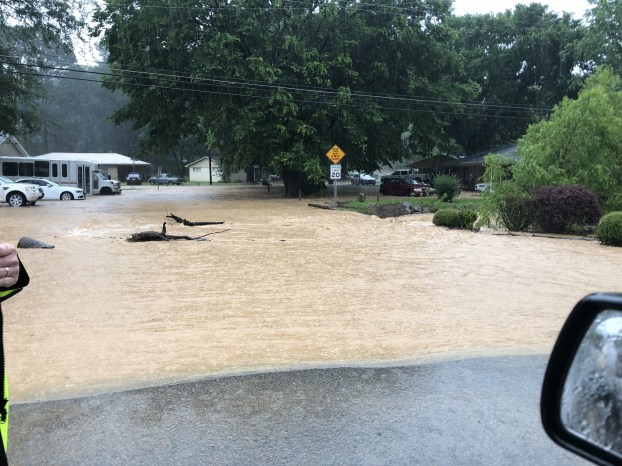 The road into the Brittany Woods community was flooded due to the heavy rainfall received in Oxford last week. Residents of the neighborhood sent a letter and signed peition to the Board of Aldermen, requesting another point of access to the neighborhood to escape if flooding occurs again. (Courtesy of Oxford Police Department)

The residents of Brittany Woods Estates are asking City of Oxford leaders for help after their neighborhood was flooded from last week’s heavy rainfall.

In a letter and a signed petition to Oxford Mayor Robyn Tannehill and the Board of Aldermen, residents asked for another point of access to their neighborhood after a number of them were “trapped” in their homes due to the only road out of their neighborhood being flooded.

The residents mentioned a lack of alternate access to F.D. “Buddy” East Parkway from their apartments.

Brittany Woods, which is a single family subdivision, Brittany  Woods Estates, which is an apartment complex, and Eastover, another affordable housing neighborhood, all saw their only access road in and out flooded from the rainfall.

“Our complex desperately needs a second northern point of ingress and egress to our apartments, connecting us directly to Buddy East Parkway,” the letter read. “This flood made us realize, if other disasters befell our community, the grim results would be catastrophic.”

During Tuesday’s Board of Aldermen meeting, Ward IV Alderman Kesha Howell-Atkinson issued a statement to the Board regarding the flooding at Brittany Woods. Over the course of Tuesday and Wednesday of last week, over 10 inches of rain fell in Oxford and Lafayette County.

Due to the heavy rainfall, seven inches of floodwater was reported in some areas of Brittany Woods and other surrounding neighborhoods, according to Atkinson.

“Last week’s weather, particularly the severe flooding that we experienced across town on Wednesday, opened our eyes to some glaring holes in the progression of our city,” Atkinson said. “Many areas of us suffered the same fate of flooded streets, but these communities were uniquely affected because the only access point of entrance or exit was impassable or too dangerous to traverse. …These residents, many most on fixed incomes or working multiple jobs, can’t afford to buy boats, kayaks or two-ton trucks that would help them move from floodwaters safely. So they depend to determine and figure out workable solutions to the problems that this city can fix.”

There were 153 residents who signed the petition, which Atkinson voiced her support of when addressing the board. Atkinson ended by encouraging the Board to take steps in addressing the infrastructure issues in Brittany Woods and other areas around the city that were discovered due to the flood event.