From book to big screen 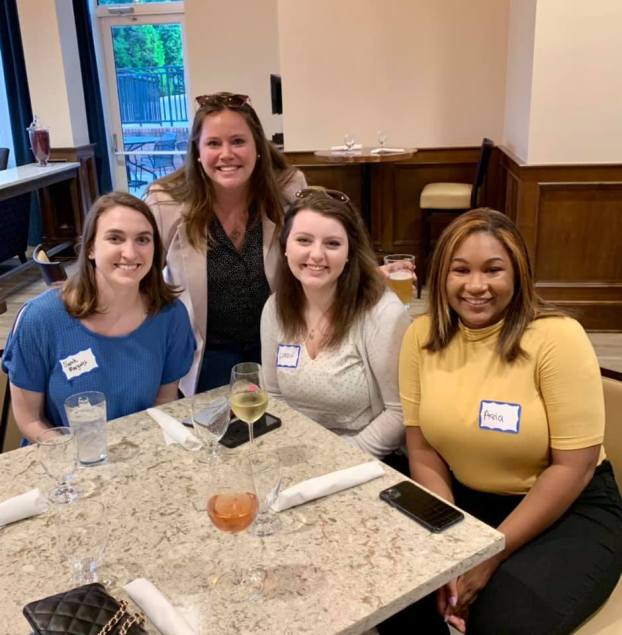 Young professionals from the LOU community gathered recently for an in-person happy hour event after nearly a year of remote events due to the pandemic. Organizers say they are working to expand and build on programs and look forward to growing the networking group in the upcoming year.

Katie Cofer was in her early 30s when she relocated to Oxford from Tunica to be closer to her then boyfriend. She was looking for work in the sales, hospitality or tourism sector and found it difficult at first to get connected to potential job contacts as well as find opportunity to get involved in community activities.

Her now-husband John Cofer suggested she attend an event sponsored by the Oxford-Lafayette Chamber of Commerce’s Young Professionals Organization. Ashley did, and over the last five years, she has become increasingly involved in the group, and now serves as its unofficial social and event planner.

“It has been a lot of fun. It has really helped me feel like I am a part of the community,” she said. “I didn’t go to college here and I’m not retired and living on the golf course … This is a great way to network and meet people, when you don’t want to go to the bar to meet people because you want to be professional. This also gives you an opportunity to do volunteer work and lots of other outlets to get involved in the community and work closely with the Chamber of Commerce.”

Allen Kurr, vice president of the Oxford Lafayette Economic Development Foundation and  president of the YPO, said the group is built on three pillars. “First is social networking – meeting new people, new friends and establishing business connections. The second is career development – we want to help people not just connect with local employers but develop a skill set that helps them grow in their career. And third pillar is volunteer opportunities. We want to give back to the community that has given so much to us.”

In past years the YPO members have conducted a fundraiser called “Our Team, Our Town,” for a local nonprofit. Plans to revive it are in the works for 2021-2022, he said.

While the YPO has existed for many years and its members number into the 100s, a new crop of organizers is working to reshape the YPO into a more cohesive organization that is more reflective of the needs and desires of today’s LOU young professionals. “We want it to be an attractor for those who are currently in Oxford or those who are looking to move to Oxford,” Kurr said. “Talent is so important to attracting businesses into the community; but talent also follows talent. Our philosophy (at the EDF) is of growing from the inside out … having an engaged and active young professionals network is critical to growing the community and the local economy.”

He explained the community is comprised of a diverse group from backgrounds to professional experiences. “We all play a role in making this community what it is,” Kurr said.  “We are open to anyone with a professional background, of any race, ethnicity, or gender and all our events are open to the public and free,” he noted. While most members of the YPO are in the 21 to 40 age range, individuals of all ages are is welcome and encouraged to engage with the group.

Upcoming events include the YPO’s popular Happy Hour networking events – the next of which is scheduled for June 15 from 5 p.m. to 7 p.m. at Lamar Yard, along with an ongoing series of educational “Adulting 101” sessions.  The  June 23 session is titled “Do I Need Life Insurance?”

Kurr and Cofer said they both intend to continue expanding the YPOs programing, especially as the group emerges from a year of virtual events due to the pandemic. Cofer said she’s excited to meet – in person –  all the new residents of Oxford who have reached out to the YPO during the past year and participated through virtual events.

“It has been crazy the number of people in the last year who have moved to Oxford in the middle of the pandemic. Many have reached out to the YPO and we have done Zooms with them. We’ve done Zoom trivia hours, zoom happy hours … All these people are new to Oxford, so I feel like we have a whole new freshman class to YPO.”

Among those who reached out was Ashley Hales. Hales and her husband Andy, a new psychology professor at Ole Miss, knew they were relocating to Oxford before the pandemic started. While in town in early 2020 Ashley Hales stopped by the Chamber and learned about the YPO when it went online due to Covid-19 gathering restrictions she was able to participate from the Louisville, Kentucky, area where the couple was living.

Long a remote worker for an international insurance company, Ashley said she knew she needed to get a head start in creating a social network in her new town so she wouldn’t feel isolated. Now in Oxford, Ashley said she has met lots of new people through YPOs events, many of whom she’s still looking forward to meeting in person.

“I think right now is a really interesting time for people who are interested in joining (YPO). It’s kind of like a fresh start for everyone. Hopefully we will see a lot of new people who haven’t connected during this time as well,” she added.

For more information about the YPO contact the Chamber at 662.234.4651 find the group on Facebook or visit oxfordms.com/chamber-of-commerce/programs-and-events/young-professionals-of-oxford