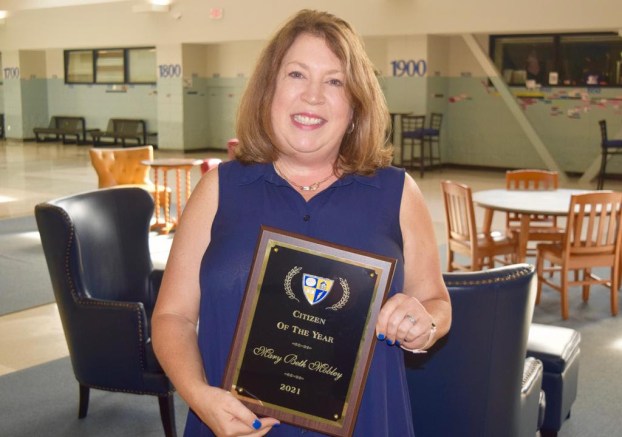 The Oxford School District honored Mary Beth Mobley with the 2021 Citizen of the Year award for her efforts in helping serve the students and families in Oxford.

During OSD’s Board of Trustees meeting on May 24, Mobley was honored by outgoing superintendent Brian Harvey. Mobley is the president of the Charger Booster Club, which helps raise money for Oxford’s athletic teams and the school’s activities groups.

The award is typically reserved for citizens from the community who are not affiliated with OSD as a parent. Mobley has a son who graduated, but she received this year’s award for her service to all students and families in the school district. She helped get masks for all of the graduates who participated in the May 21 Commencement ceremony and has been involved in OSD’s Parent Teacher Organization.

When the Family Educational Rights and Privacy Act kept the district from posting class schedules publicly 12 years ago, Mobley created the Facebook group “Who Did They Get” to help parents connect with their child’s other classmates. The group became a discussion board for all OSD parents to ask questions and get answers regarding their child’s teacher.

“My kids have attended every school in the district. I love this school district.” Mobley said when presented with the award at the meeting. “My family knows how privileged we are to live in a school district as wonderful as Oxford. It has been a pleasure to serve here.”