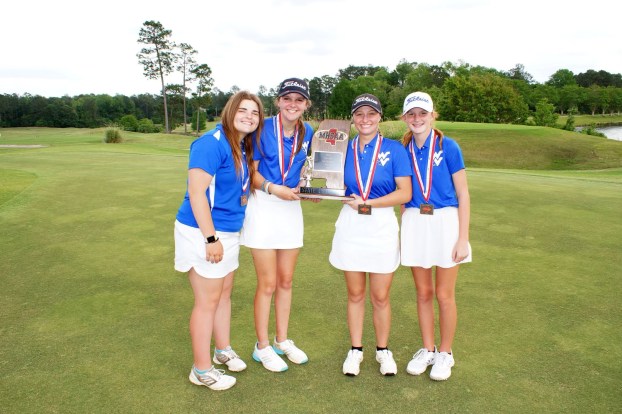 Water Valley has another state championship with this one occurring on the golf course in historic fashion.

The state championship is the first in school history to be won by a Water Valley girls athletic team. The team is comprised of Sydney Epes, Parker Avant, Chloe Clement and Bethany Pryor.

After the first day of the two-day tournament, the Blue Devils found themselves seven strokes back of New Albany. A strong second day effort propelled them to the state title with a combined score of 366 to finish ahead of 10 other teams on the leaderboard.

“I told the girls that in all my years of coaching, I had never seen a team do what they had done,” said Water Valley head coach Michael Howland. “Their play was a testament to their toughness and willingness to work hard to achieve their goals.”

In the individual competition within the team tournament, Epes placed fourth while Avant finished seventh, Clement finished 10th and Pryor finished 17th. Caroline King of New Albany finished first overall shooting rounds of 76 and 81 on the course at the Timberton Golf Club in Hattiesburg.

Water Valley’s boys team finished fourth in the Class 3A state tournament, which was held at the Hillendale Golf Course in Corinth last week.