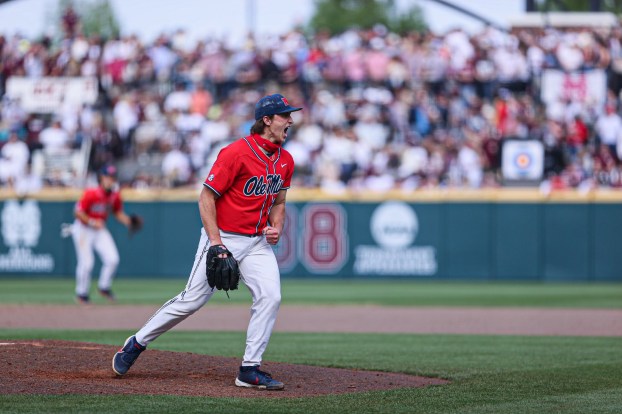 Ole Miss pitcher Doug Nikhazy celebrates on the mound during their game against Mississippi State at Polk-Dement Stadium in Starkville on Saturday, April 17, 2021. Nikhazy pitched a complete game for the first time in his career as the Rebels won 9-0. (Mississippi State Athletics)

Kevin Graham, Dough Nikhazy and Gunnar Hoglund were named finalists for the award by the Mississippi Sports Hall of Fame on Monday. Mississippi State’s Landon Sims and Tanner Allen are the other two finalists.

Every year, the Ferriss Trophy is given to the top college baseball player in Mississippi.

Graham is having one of the team’s best seasons at the plate, reaching base in 40 consecutive games and in 45 of 47 games this season. The streak is the sixth-longest in college baseball this season, third-longest active streak in the nation and the second-longest active streak in the Southeastern Conference. He is currently hitting .335 with 42 runs batted in and 10 home runs.

Similar to his teammate on the mound, Nikhazy is also having one of the nation’s best seasons. The left-hander ranks in the top-50 nationally in strikeouts with 84, strikeouts per nine innings and hits allowed per nine innings. Nikhazy also recorded his first complete game as a Rebel when he pitched against Mississippi State on April 17 in Starkville.

The Ferriss Trophy winner will be announced during a virtual program on May 24 at noon, where all the C Spire Outstanding Player awards will be given. The program will be live streamed on the Mississippi Sports Hall of Fame’s website at msfame.com.