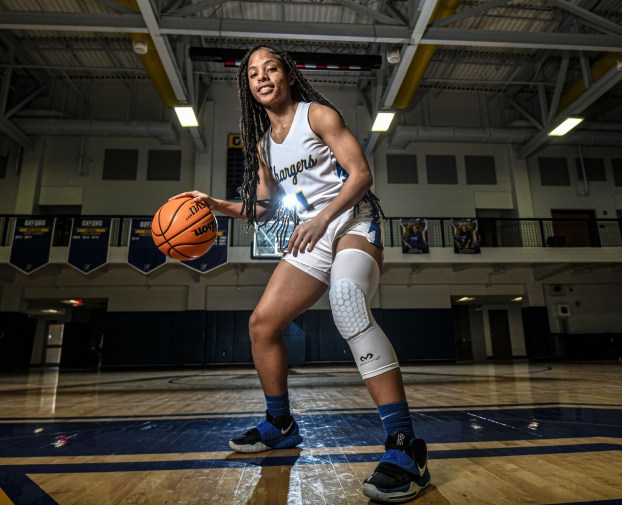 Oxford High’s Audria Houston is the Oxford Eagle’s Player of the Year, in Oxford, Miss. on Wednesday, March 24, 2021. (©Bruce Newman)

When the COVID-19 pandemic hit last March and people were self-isolating or quarantining at home, Audria Houston chose to turn a negative situation into a positive one.

Like many, Houston took advantage of being at home and lounging around without having to go to school, but that attitude quickly changed and she started to become more active.

During the shutdown, the Oxford guard spent hours at a nearby basketball court to work on her game and hone her skills. The decision to make the most of her time last spring and summer paid off.

Houston improved her scoring output by five points per game from her freshman year to her sophomore season, going from 10 points per game to over 15 points per game. Becoming an anchor for Oxford’s offense earned Houston this year’s EAGLE Player of the Year honor.

“It really happened all over the summer,” Houston said. “I had trainers. I put in the extra work, and I have family members that motivated me every day. I thought to myself, ‘Make goals for myself.'”

When the team reunited once the school year began and preseason practices started in October, Oxford head coach Cliff Ormon said he immediately noticed the improvements in Houston’s game.

Relying on Houston and making her a focal point for the offense was something Ormon knew needed to happen in order for the Chargers to have success this season.

“You could tell she took some of the things we talked about last year and started to implement that and know that there were some things she needed to improve on,” Ormon said. “Even when you watched her in seventh and eighth grade, you knew she had a lot of potential. Had a great ninth-grade year but definitely saw a lot of improvement as a sophomore.”

Houston also increased her rebounding average by more than one per game with 5.1 boards and also averaged 1.3 assists per game.

With Houston’s increased productivity, along with raising her teammate’s level of play, Oxford had one of its better seasons in the last five years. The Chargers hit their stride in the back end of the season, leading to the Region 2-6A tournament championship in February. It was the first region tournament title for the program since the 2015-16 season.

At the start of the season, Houston said she did not immediately notice the positive difference in her game. Around mid-November, following their game against Independence, is when Houston realized she was playing at new level.

“I wasn’t averaging as many 18 to 20 (points per game) like I did midway through the season,” Houston said. “The Independence game, that’s when I started to get the hang of stuff and get a feel for the game.”

With a full offseason, including the potential for a normal summer schedule with games in June, Houston and Oxford could continue to see their success take yet another step next season.

Joiner, another player who saw her game take a big leap, became a consistent force underneath the basket for Oxford. She averaged a team-high 7.9 rebounds per game along with 9.4 points per game. She led the team in blocks with 88, averaging 3.2 per game.

With Houston’s scoring presence around the perimeter along with Joiner’s presence in the post, Oxford benefited in the win column late in the season.

“Miracle is no doubt a very talented sophomore as well,” Ormon said. “Her length, right at six-foot tall, can handle the ball when I let her play out in the perimeter and inside. The thing she kind of started to do when our team, I thought, play better basketball, it was defensively. We were starting to understand who we were and what we could do and Miracle brings a lot of presence around the basket.”

When there were games where Houston struggled to score, Tellis was a teammate who was there to pick up the slack.

As the Chargers second-best scorer, averaging 10.2 points per game, Tellis was a consistent producer for Ormon on any given night. The senior led the team in assists with 4.3 per game and had 3.6 rebounds per game.

“She just loves to compete,” Ormon said. “She’ll do whatever is needed, and this year we needed her to handle the ball. She was our point guard in the true definition. She hit some big shots for us throughout the season and just kind of that consistent person. This team really needed that senior leadership.”

As a sophomore, Jones led the Commodores in nearly every category, including scoring with 12.8 points per game. She also led the team in rebounding with 7.5 per game and assists with 2.9.

“(Jones) really came on strong for us this year,” said Lafayette head coach Shayne Linzy. “I was really impressed with a lot of the things she was able to do. I felt like there were some games where she almost took a back seat, where I’m sitting there telling her, ‘Take over. Take the game over.’ She’s got the ability to do that. … She can really take a game over any time she wants.”

Since starting on the varsity team since her eight-grade season, Norphlet has been a key part of Lafayette every year. With a lot of the offensive production gone, Norphlet finally became a go-to player for Linzy on a nightly basis.

Finishing behind Jones as Lafayette’s second-best scorer, averaging 11.2 points per game, Norphlet also led the team in steals with 2.5 per game. She also averaged 2.8 rebounds per game and 2.6 assists.

“Karizma, it has been fun to watch her progress from year to year and she really has,” Linzy said. “She’s one now, that even when I’m getting on to her, she’ll have a smile on her face and nod her head. But, she’s also gotten to the point now where she sees the game and she can look at me and say, ‘Coach, this is what I saw or what I see,’ and we can kind of go back and forth and figure it out together. … If there’s one person who knows how it needs to be done, she’s that person just because of her experience.”

Linzy said he always knew Pettis had the ability to take her game to the next level. This season was proof of that, averaging 5.9 points, 3.5 rebounds per game in her junior season. Heading into her senior season next year, Linzy is looking for Pettis to continue taking that step.

“You knew that was a kid that was going to be on the court, you just didn’t know how much,” Linzy said. “(Pettis) is a defensive-type player. She’s a girl that I would put on the other team’s best player. I knew that ability was there and I was just hoping to get a little offense. Once Sha’brya got out there and all of a sudden she earns a starting role it was like a light went off and she just went off.”