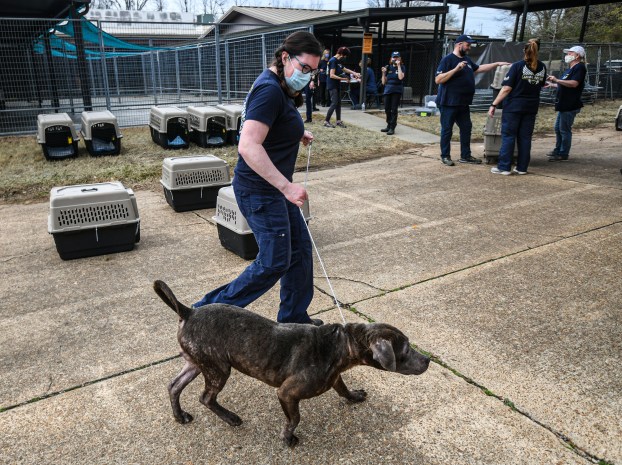 A woman with the Animal Rescue Corps walks a dog to a crate for transport as dogs are removed from the Animal Shelter in Oxford, Miss. on Tuesday, March 16, 2021. (©Bruce Newman)

‘We have learned a lot’: Oxford Aldermen back out of animal shelter consulting contract, hire Team Shelter USA

The Oxford Board of Aldermen voted to head in a different direction regarding the next steps for the city’s animal shelter during a special-called meeting on Wednesday, March 24.

During the board’s regularly scheduled meeting on March 16, the Board of Aldermen voted to sign a contract, hiring Tim Crum and Animal Shelter Services to provide fresh eyes on the situation surrounding the city’s animal shelter.

They have since reversed their position and decided to hire Dr. Sarah Pizano of Team Shelter USA, LLC, for animal shelter consulting services.

“We have learned a lot over the past two weeks, and I am excited now about the opportunity to reinvent and reinvigorate our shelter,” Oxford Mayor Robyn Tannehill said. “We want to use our shelter wisely, and we understand more today about the different philosophies of shelter management and intake programs and fostering programs than we understood even a week ago.”

Tannehill said that Crum is an “amazing resource” and thanked him for his understanding as the City reevaluated their decision to enter into a contract with Animal Shelter Services.

Pizano is the author of “The Best Practice Playbook for Animal Shelters,” a guidebook that Tannehill said the board had ordered and read. Pizano, considered an animal shelter expert, founded Team Shelter USA in 2017.

Tannehill said she felt pressure to act quickly during the March 16 meeting, which led to the subsequent decision to conduct further research.

“At that last meeting, I felt pressure from the public to make a quick decision, and I knew that we were in a position where we needed to make some steps quickly,” she said. “After reflecting on that decision and still continuing to research, I reached out to a consultant who is widely recognized as the lead professional in community-based sheltering programs, Dr. Sarah Pizano.”

Tannehill also said that she, city Chief Operations Officer Bart Robinson, Alderman and shelter liaison Janice Antonow and executive assistant and communications director Kara Giles spent the last two weeks researching. According to the mayor, the group called other communities, researched different shelter programs and also visited the Tupelo-Lee Humane Society on Monday. The director for that organization is also coming to visit the Oxford animal shelter building this week.

The group is also scheduled to visit with Memphis Animal Services soon.

Tannehill said that Oxford Police Department, which is currently acting as Animal Control inside city limits, has picked up one dog since the city’s contract with Mississippi Critterz was formally ended.

While the city is still accepting applications for an animal control officer and kennel attendants, there is one thing that’s still not welcome: animal surrenders.

“We are receiving calls from people who have found stray animals, and the shelter is not accepting surrenders,” Tannehill said. “We know that this is unfortunate and inconvenient, and we’re sorry. But at this time, we cannot provide a sheltering program.”

Once a new animal control officer is hired, the City will use training materials provided by NACCA, the National Animal Care and Control Association.

Tannehill also stated that the City is working to form an alliance with groups that place animals in foster care, so those who find strays will have an option to rehome animals.

According to Tannehill, the City and Lafayette County will pay a combined $25,000 to Pizano and Team Shelter USA as part of the contract, which includes an initial formal assessment and six-month evaluation and advisement period. Pizano did give the City a $5,000 discount.

“She will do research prior to the on-site assessment. The current building design, state statutes and local laws as they relate to animal welfare and veterinary practice, health department requirements and area stakeholders will be reviewed,” Tannehill said. “City and county leaders, as well as staff members and potential volunteers, will be interviewed as well.”

Pizano, described as a “hand-holder” by the mayor, will make recommendations regarding “every aspect of shelter management and animal welfare.”

She will also provide coaching and guidance via Zoom meetings every two weeks.

“I believe, looking back, that that fits our need better, to have someone who will walk alongside us for six months, not only handing us the plan but helping us facilitate it and being there to answer questions and to consult as needed,” Tannehill said.