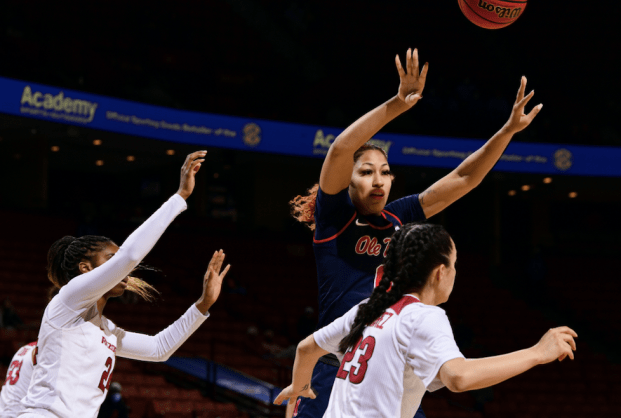 Ole Miss forward Shakira Austin (0) passes the ball out to the corner against Arkansas during the second round of the SEC Women's Basketball Tournament on Thursday, March 4, 2021 in Greenville, SC. (Todd Van Emst/SEC)

Heading into this year’s Southeastern Conference women’s basketball tournament, Yolett McPhee-McCuin stated she had “groceries” in the kitchen for the first time, but now they have to cook the right meal.

Well, Ole Miss is cooking at the right time as they upset No. 13 Arkansas, 69-60, on Thursday in Greenville, S.C. to advance to the quarterfinal round for the first time in 11 years.

Shakira Austin finished with a career-high 29 points to lead the Rebels (11-10) to their second-straight win over a ranked opponent, and third this season.

With NCAA Tournament hopes still alive, Friday’s game against No. 14 Tennessee for a chance to get into the semifinals is also a game that McCuin feels is one that could put them into the tournament for the first time since 2007.

According to ESPN’s Charlie Creme, Ole Miss was last in the First Four Out group entering the tournament and have a NET ranking of 47 on Wednesday. With Thursday’s win over Arkansas, the Rebels have three wins over two top-20 teams in the NET rankings.

“Win or go home,” McCuin said. “We’ve got to control that we can control. Here’s another point I want to make for our case. That’s an Arkansas team that beat UConn. That is a legitimate team. They are going to be a three seed and we beat them. …We are a team in the NCAA Tournament and create havoc. I think the SEC is that strong.”

Ole Miss and Arkansas (19-8) met in Fayetteville on Feb. 19 after the winter storms delayed the game a day. The Rebels left with a 10-point loss to the Razorbacks and McCuin said she did not recognize the Rebel team that took floor at Bud Walton Arena.

On Thursday, the Rebels held Arkansas to their lowest point total in a quarter with seven in the opening 10 minutes. From there, McCuin’s dictate and disrupt defense continued to clamp down on an offensive-minded Razorback team.

“I didn’t know that team,” McCuin said. “I don’t know what we did in Arkansas, but I know we didn’t think about it and we focused on shrinking the gaps. I thought our defensive intensity and our rotation was so good that we were able to wear them down. So, when they needed those (three-pointers) they didn’t have the legs to shoot it.”

Donnetta Johnson finished with 12 points while Austin recorded a double-double, pulling down a game-high 13 rebounds. SEC Freshman of the Year Madison Scott was held to three points but finished with six rebounds and three assists.

Ole Miss and Tennessee will be the final game of the day on Friday with tip scheduled for approximately 7:30 p.m. CT. The game will air on the SEC Network.