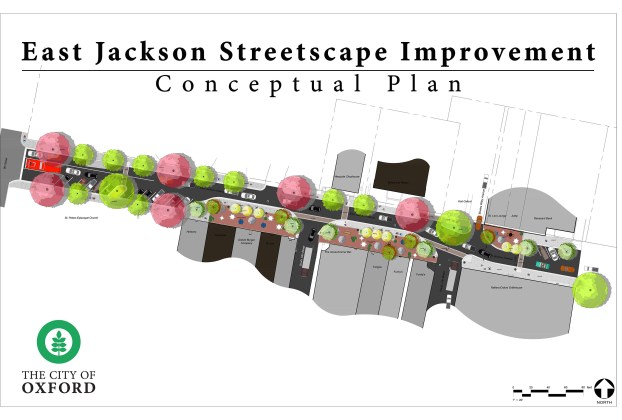 A project to widen the sidewalks on East Jackson Avenue in Oxford and construct a permanent outdoor dining area was approved this week.

During their meeting on Tuesday, the Oxford Board of Aldermen approved a request to advertise for bids for the East Jackson Streetscape Improvements project.

The Board held preliminary discussions during a recessed meeting on Jan.25, which included possible plans to widen the sidewalks on the north and south side of East Jackson Avenue, something that was previously planned, and adding a permanent outdoor dining space.

Following the work session, the Board invited restaurant and businesses owners who have establishments on East Jackson Avenue to meet with them and share their thoughts on the project. The owners were also asked their opinions on a preferred timeline to begin the project.

The city’s Chief Operating Officer Bart Robinson told the Board four business owners took them up on the invitation to meet and were in favor of doing the project sooner rather than later. The owners said they are still receiving federal PPP money through late July and were in favor of the city starting the project in the spring in order to have it completed by summer, before the fall semester begins.

“They unanimously said, ‘Look, we’re hurting about as bad as we can.'” Robinson said. “They said if we were going to do the project, they wanted us to do it now. They wanted to rip the band-aid off and move forward with it.”

The project is coming off the City offering outdoor dining on the Downtown Square at the end of last year to help with the strain of COVID-19 regulations on local restaurants.

Conceptual plans were presented to the Board during last week’s work session, showing two outdoor dining areas located on either side of the South 10th Street intersection. New sidewalks would then be placed in front of the dining areas.

The project calls for 28 of the current 45 parking spots to be used for the new sidewalks and dining area, leaving 17 parking spaces on the west side of the dining area and the north side of East Jackson Avenue. The current width of the sidewalks is four feet.

A total cost for the project is projected around $750,000, with $250,000 being the sidewalk expansion project which the city had previously budgeted for. The other remaining $500,000 could possibly be funded by the city’s two percent for the Parking Garage debt service, which was budgeted in the Fiscal Year 2020/2021 as reserve, or from the Oxford Trust for Parking Garage debt service (budgeted in Fiscal Year 2020/2021 as reserve).

Mark Levy, the city’s Director of Special Projects, told the Board they would work on finalizing design plans this month so they can begin advertising for bids by March 10. The opening of bids would be April 15 and if the Board accepts one of the bids received, they would begin construction of the project in May.