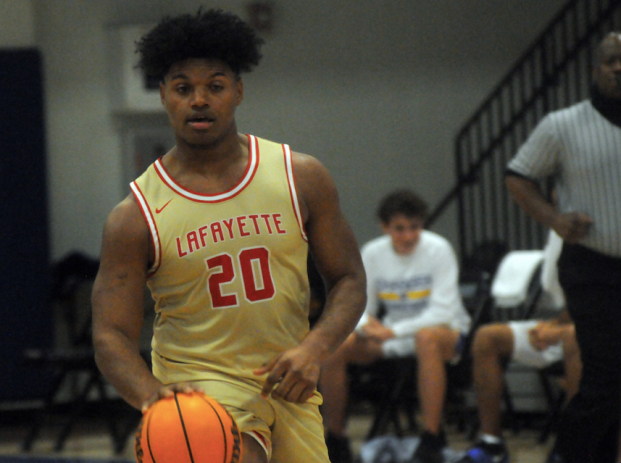 Lafayette’s Mario Wilbourn (20) dribbles up court during their game against Oxford at Oxford High School on Tuesday, January 12, 2021. The Commodores won 64-60 in overtime for their first victory over Oxford since Jan. 18, 2011. (Jake Thompson/Oxford Eagle)

Near decade-long losing streaks ended inside the Oxford High School gym on Tuesday.

Oxford hosted Lafayette in basketball for the second time this season, and the usual outcome did not take place, with the Lady Chargers defeating Lafayette and the Commodores defeating Oxford in a thrilling overtime victory.

“We needed a win,” said Oxford head coach Cliff Ormon. “Beating Lafayette tonight is the icing on the cake. These girls needed a win. We played close games against Hernando here and lost in overtime and got beat by two at Southaven, missing free throws and things like that. It was kind of one of those games where you could see it was coming down to that fourth quarter. I thought tonight we kept fighting.”

The game remained tight throughout, with Lafayette taking a three-point lead into halftime. Oxford continued pressuring the Lady ‘Dores in the second half.

When the two teams met on Dec. 11, Lafayette pulled away in the fourth quarter of what was also a close contest. On Tuesday, Oxford looked to be the team determined to leave with the victory.

“I felt like Oxford played harder and I felt like we were kind of content in some areas, but not a whole lot,” said Lafayette head coach Shayne Linzy. “This has been us. Kind of up and down. Didn’t hit the boards nearly as hard as we needed to. I thought Oxford did a great job on the boards, out hustled us for the ball. Not all game, but in the key moments, they were the ones who came up with it.”

With four seconds remaining, J.C. Dennis hit a three-pointer to pull Lafayette even with Oxford at 54-all, forcing overtime.

Dennis continued to contribute in the extra four minutes, helping lead the Commodores to the 64-60 win. The victory was the first for Lafayette’s boys over their crosstown rival since Jan. 18, 2011.

The second half saw a surge by Lafayette (3-9), led by the post play of Mario Wilbourn. The junior forward scored 18 points with 12 of them coming in the third quarter.

“Mario had a good feel,” said Lafayette head coach Brad Gray. “He was getting good touches around the basket and he was just in rhythm tonight. Some nights he’s in rhythm and some nights he’s not. The past couple games, he got some of the similar looks as tonight, but he was mostly fading away from the basket and hitting turnarounds. I kind of talked to him and said, ‘Look, you get the ball in there you’ve got to attack the rim. Quit fading away from the basket. Be the powerful guy you are and attack the rim.'”

Oxford (8-7) held the lead at the end of the first three quarters, controlling the game despite Lafayette keeping it close. Offensively, the Chargers were unable to generate much offense and struggled to get open looks all night.

Senior Chase Rose scored a game-high 26 points for the Chargers, but there was not a sense of urgency felt by head coach Drew Tyler while watching his players.

“We were definitely stagnant on offense. Lack of ball movement,” Tyler said. “A lot of standing around on offense, so Lafayette didn’t have to work real hard to guard us.”

Junior forward Omari Frierson was out of Tuesday’s game due to COVID-19 protocols, which was a loss of size for the Chargers on the floor.

Lafayette returns to the court on Friday when they jump back into division play with a trip to Lake Cormorant. Oxford’s division games at Horn Lake on Friday were postponed due to the Eagles dealing with COVID-19.