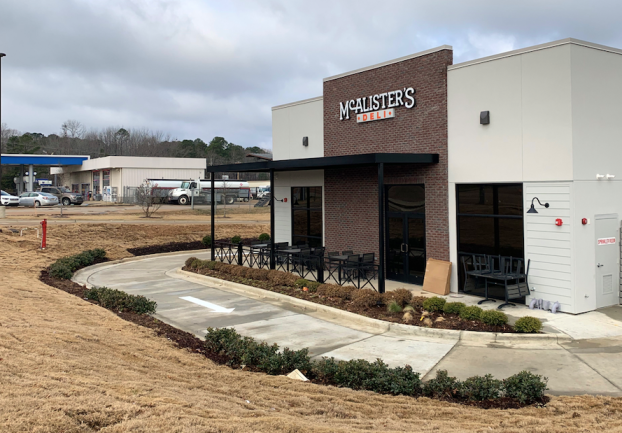 McAlister’s Deli will open its new location at 2623 Jackson Avenue West on Monday. The restaurant’s original University Avenue location closed and the building is expected to be sold. (Jake Thompson/Oxford Eagle)

McAlister’s Deli is changing locations in Oxford and set to open its doors next week.

The fast casual food chain is moving across town to its new location at 2623 Jackson Avenue West starting on Jan. 11. The restaurant, which originated in Oxford, closed its 1515 University Avenue location late last year, which served as the home of the very first McAlister’s Deli.

The building that housed the University Avenue location will be sold, according to a spokesman with McAlister’s.

“Oxford holds a significant importance to our brand and everyone at McAlister’s as it is where it all began 32 years ago,” said Michael Freeman, vice president of operations for McAlister’s. “What started as a small neighborhood gathering place in an abandoned movie-set diner had become a staple in communities across the country and we look forward to sharing our table with the Oxford community at our new location.”

To celebrate the restaurant opening its new location, there will be a contest on its Facebook page where 10 winners will receive a $50 gift card. The contest runs from Jan. 11 to 14 and the winners will be announced on Jan. 15.

McAlister’s is also partnering with Lovepacks of Oxford to provide weekend lunches for children in need.

Founded in 1989, McAlister’s Deli has expanded from its first location in Oxford to 470 restaurants in 27 states. It is currently headquartered in Atlanta.