Jerrion Ealy to miss baseball season due to shoulder… 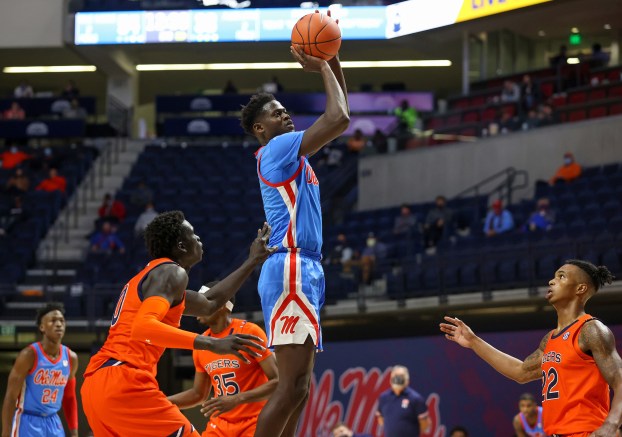 After a three-game losing skid, the Rebels returned to conference play and defeated Auburn 72-61 at the Pavilion on Wednesday.

With Khadim Sy’s best performance of the season and a solid rebounding night by Austin Crowley, the Rebels were able to get their first SEC win of the season.

Battling a string of injuries and illnesses throughout the first six weeks of the season, Sy led Ole Miss (6-3, 1-1 SEC) with 13 points along with two rebounds.

“Seven weeks ago (Sy) may have been our best practice player. His voice was loud,” Ole Miss head coach said. “Finally, he’s got a little practice. He was rusty the last couple games, but you could tell he was coming around in practice. We need him big. He’s going to play great, great minutes for us.”

Sy’s offensive effort was matched by Crowley’s defensive effort. The West Point native pulled down a career-high 10 rebounds with eight of them coming on the defensive end of the court. Crowley finished with eight points and four steals.

“I just want to affect the games as much as I can in different ways,” Crowley said. “If I’m scoring 20 tonight or scoring zero and getting 10 rebounds, it doesn’t really matter. As long as I’m contributing, helping the team it doesn’t matter.”

The Rebels were in control the majority of the game, leading by as many as 18 points in the second half. Midway through the second half, Auburn (6-5, 0-3) pulled to within nine points.

Davis called a timeout to regroup his players, giving them a simple message in the huddle. It worked as the Rebels responded with a quick 7-0 run out of the break to stretch their lead back out.

“I just thought that we had to settle in,” Davis said. “We got loose with the ball. We were going to go back to man-to-man defense. We’d been playing some zone. We got loose in our zone, didn’t rebound in our zone.”

On defense, the Rebels continued to stifle opponents and create extra opportunities on offense. Auburn had 16 turnovers, which Ole Miss scored 13 points off of. In the paint, the Rebels outscored Auburn 28-22.

Ole Miss returns to action on Jan. 12 at Florida at 6 p.m. CT. The Rebels home game against South Carolina scheduled for Saturday was postponed on Thursday due to a combination of positive COVID-19 tests, contact tracing and subsequent quarantining within the Gamecocks program. A make up date for the game is not known at this time.