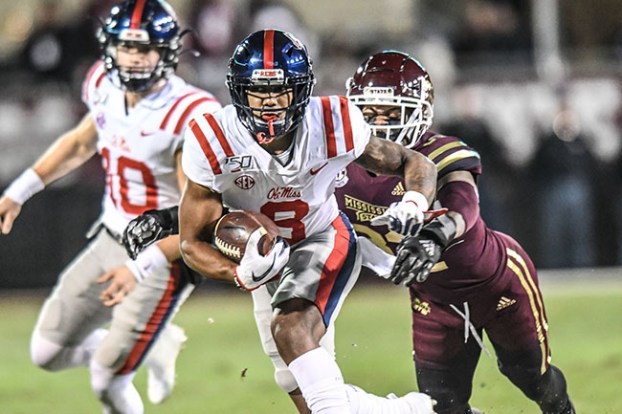 Egg Bowl has different meaning for some in 2020

What a difference a year makes.

This time in 2019, Ole Miss was coached by Matt Luke and Mississippi State coached by Joe Moorhead. A full calendar year later, both programs look completely different, and it is all from the butterfly effect that was the final moments of last season’s Egg Bowl.

Elijah Moore’s touchdown celebration seen around the world seemingly set off a chain reaction that turned Mississippi’s college football landscape on its head, if one is a believer in such things.

Lane Kiffin became the head coach of the Rebels, replacing Matt Luke, while Mike Leach took the reigns in Starkville. The much-anticipated matchup between the former Pac-12 coaches in one of the fiercest rivalries, at least off the field, in college football may not have the same heat to it as in previous editions.

The mentality and philosophy of both Kiffin and Leach have made this year’s Egg Bowl less intense entering Saturday’s game, though both know the importance it has in Mississippi.

Kiffin does have some knowledge of the battle for the golden egg. His brother, Chris, was once a defensive assistant under Hugh Freeze’s staff.

“I had known about it, just from watching. It used to be on Thanksgiving a lot,” Kiffin said. “Then my brother being here for a number of years. Knew it was always really competitive and a big deal around here. It’s a big deal.”

For Leach, there are even less connections to the biggest college football game in Mississippi. Coming from Washington and a prior coaching stint at Texas Tech, Leach’s personal knowledge of the Egg Bowl is less so than his opposing coach’s.

For those who will be on the field, this year’s game has different meanings. After 366 days of hearing the talk, watching the replay and answering question after question, Moore gets the opportunity to rewrite his Egg Bowl story.

The wide receiver replicated a touchdown celebration performed by DK Metcalf during the 2017 Egg Bowl, where the current Seattle Seahawks standout imitated a dog urinating on the Mississippi State end zone. Moore’s actions caused a penalty on the ensuing extra point try that was missed by Luke Logan, sealing the win for the Bulldogs.

A year older and a year wiser, Moore has matured and said he realizes where he may have gone wrong in those few seconds after his touchdown reception. He is now just looking ahead to Saturday and a chance to bring the Golden Egg back to Oxford – as well as a chance for a third-straight game of 200 or more receiving yards, which would be a first in the Southeastern Conference.

“I feel like I learned a lot,” Moore said. “I’m human and I make mistakes. You’ve just got to learn from them and don’t let them happen again. I let my team down and I know I won’t let it happen again.”

The Egg Bowl still holds major significance for those Mississippi-born players on each roster. For Jerrion Ealy, it is a chance for him to secure his first win over the team that originally recruited him.

Ealy, a self-proclaimed Mississippi State fan during his childhood who said one would find plenty of Bulldog memorabilia at his home, said he is looking to provide new memories for the Rebels come Saturday.

“This is the game that you only have to win,” Ealy said. “You can lose all the rest of them. This one, you must win this one. No matter what it takes or what you got to do. You got to win this one.”