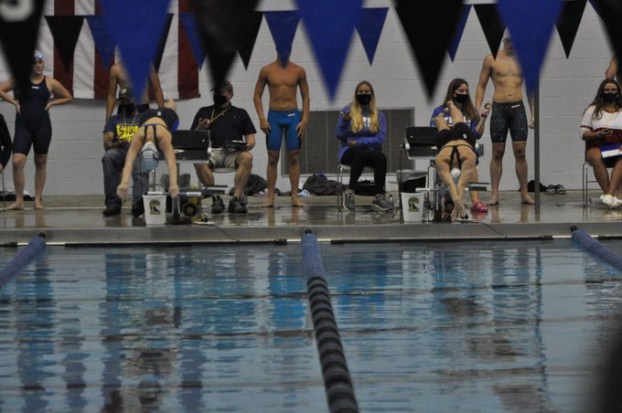 Oxford’s Cole Oyler, left, and Julia Dennis, right, dive into the pool at the start of the 50-yard freestyle during the Class II state meet at the Tupelo Aquatics Center on Saturday, October 24, 2020. Dennis and Oyler took first and second place, respectively, as the Lady Chargers posted their best team finish since 2011. (Courtesy of Elizabteth Vaughn)

In what was a unique year in the pool for high school swimming, Oxford managed to have one of the program’s best seasons.

Oxford’s girls team finished runner-up at Saturday’s Class II meet at the Tupelo Aquatics Center with 98 points, which was their highest finish since 2011. They finished 33 points behind state champion Madison Central.

The Jaguars swept the Class II meets with the boys team also winning the state title with 109 points. Oxford boys finished in third place with 66 points.

“I am just so glad we were able to make this season work,” said Oxford swim coach Robert Gonzalez. “The doubts of the season were felt all the way into September on if there would be a championship meet. Due to that, it was important on so many levels beyond the sport itself — it allowed a little bit more normalcy into the lives of our swimmers and families. I am so proud of how they responded to adversity in so many ways this season to make it something they’ll never forget.”

The day prior, Lafayette swimmers competed in the Class I state meet.