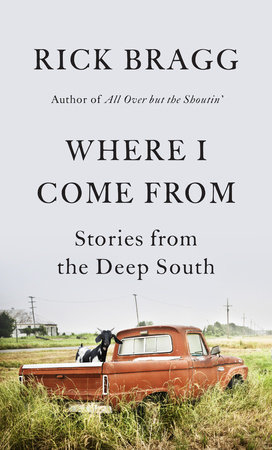 Author Rick Bragg, whose work many will recognize from the pages of Southern Living Magazine and Garden & Gun, will be taking part in a virtual book reading and Q&A with Square Books this Wednesday at 5 p.m.

The event, hosted via Zoom by bookstore owner Richard Howorth, will focus on Bragg’s latest collection of more than 60 essays, “Where I Come From.” The book is divided into sections with titles including: “Faux Southern” and “Christmas in a Can,” and is an ode to the people, places and memories that comprise the Southern lifestyle.

For Bragg, the decision to release a collection of essays during a pandemic was simple.

“When Knopf took it, I don’t think anyone knew what was going to happen in the world. I think the publishing houses know that people want and need books right now,” Bragg said. “A book that is about the easier side of Southern life… there’s some grit here and there, but a book that talks about what makes life down here worth living.”

Bragg said that, with the onset of the pandemic, he feared he would not be able to do one of the things he loves most as an author: go on tour and meet readers face-to-face. Like many in the Pre-Covid world, he’d never heard of the now-popular video conference software, Zoom.

“When they first started talking about Zooming, I thought, ‘I am 61 years old. I do not tweet, and I will not Zoom. I still do not tweet – I mean, I have some pride – but I’ve been Zooming up a storm,” he said. “I don’t like it, but it is the way we can stay in some kind of face-to-face touch with our readers.”

Bragg has made a name for himself in preserving the memories from his own life and family in North Alabama, as well as his experiences traveling throughout the American South, and “Where I Come From” is no different.

“It always bothered me, that it would be a fashion. Obviously, Southern is a state of mind; it’s food, fashion, music, arts,” he said. “I went in a very fashionable Southern store and they were selling little bundles of cotton and t-shirts that were colored with red mud. And I thought to myself, ‘My God, I can sell them 50 that are genuine. In an hour and a half, I could have half a million dollars.’”

This drive for authenticity, for finding the beauty in even the simplest of Southern scenes without sacrificing the ugly truth, is what has made Bragg a household name across the country and the world.

In “Where I Come From,” Bragg has once again returned to stories about his family members in the foothills of the Appalachians, as well as tales from his travels to cities like New Orleans and Miami.

In the New Orleans essays, Bragg writes about his time spent there, especially writing at the Columns Hotel and at various eateries, including Garden District legend Domilise’s. Waxing poetic about the roast beef debris and half-and-half po’boys came easily, he said.

“The fact is, most of the food stuff I did for magazines, I did because someone called up and said, ‘Hey, you want to go to New Orleans and write about po’boys?’ What are you going to say?” he said. “Most of the food writing in this book – and I want the readers to know this – came because I said, ‘I want to go eat something.’ It is not any more complicated than that.”

While the features that comprise the American South – its architecture, literature, music, cuisine – may seem exotic to some, Bragg said, it’s remarkable, even from the inside.

However, at the heart of his writing is the everyday person, Bragg said.

“I have never been apologetic about writing about mill workers, and steel workers and coal miners and fist fighters and honky-tonk guitar pickers,” he said. “I have always relished giving a voice to those people. I have enjoyed getting to do that, and If I’m being honest, that’s the biggest part of my living. Those are my people.”

In a parting word before he takes to Zoom and “Where I Come From” is released in stores this week, Bragg gave a word of caution for viewers:

“I want them to know, more than anything else, I am a lot better looking than the way I appear on a Zoom screen,” he said. “As for the book, I just hope they find their own story.”

To RSVP for the event, email rsvp@squarebooks.com.