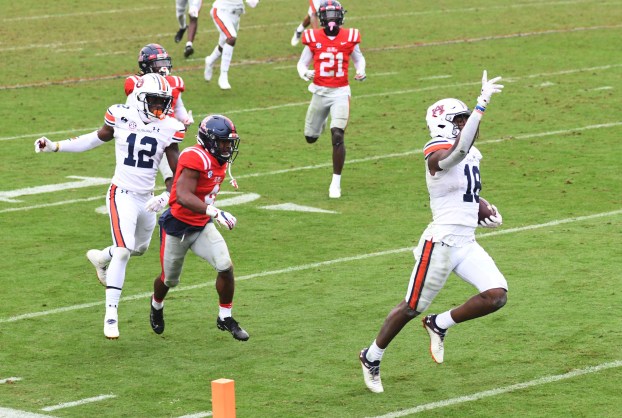 Turnovers and missed opportunities plagued Ole Miss once again on Saturday and cost them a chance at their second win of the season.

With a little over 90 seconds remaining the Rebels had a chance to tie the game or possibly beat Auburn, but Matt Corral’s final pass was intercepted and the Tigers came away with a 35-28 victory at Vaught-Hemingway Stadium.

Since defeating Kentucky in overtime on Oct. 3, the Rebels have lost their last three games.

Trailing by one point, Auburn’s Bo Nix hit Seth Williams for the 42-yard touchdown followed by a successful two-point conversion to go up with 1:11 remaining.

Another key moment in the game came following a Jerrion Ealy touchdown to put Ole Miss (1-4, 1-4 Southeastern Conference) up 28-27 with 5:43 remaining. Auburn’s Shaun Shivers reached down for the ball on the ensuing kickoff but then let it roll into the endzone where it was landed on by a Rebel.

If Shivers had touched it then it would have been a touchdown, giving the Rebels a little bit wider cushion. Kiffin said an official told him the play was reviewed and not deemed to have been touched by Shivers. The officials did not stop play to do an official review.

“You don’t really challenge anymore in college because they review everything, supposedly,” Kiffin said. “There’s no use to challenging, because I go to the guy and he says they looked at it and didn’t see anything. Even when they don’t stop it, they’re still looking. Now, why they didn’t stop and look closer, I have no idea. That’s the equivalent of a scoring play that they stop all the time now forever it feels like.”

The game did not have to come down to the final drive of the game for the Rebels, but miscues throughout the day put pressure on Corral and offense to deliver one more time.

The sophomore recovered from his six-interception performance a week ago against Arkansas, but Corral managed to throw to more against Auburn. The first came at another crucial time during the Rebels’ second drive of the game.

From Auburn’s four-yard line, Corral was picked off by defensive back Roger McCreary when looking for Braylon Sanders in the back of the endzone. That turnover resulted in seven points for Auburn on the ensuing drive.

Another miscue came in the second-to-last play of the game when Corral’s pass to Kenny Yeboah was dropped around the Auburn 10-yard line with three seconds remaining.

Clock management was also questionable during the Rebels’ final two drives. Leading by one with a little under five minutes remaining, John Rhys Plumlee replaced Corral at quarterback and went with two straight runs for a loss of yards before punting the ball away to Auburn at midfield.

A timeout by Kiffin before the punt left them two for their final drive, which he only used one of.

“On the (first drive), you’re in four minute (drill) so that’s what you do,” Kiffin said. “I know you’re not use to seeing it because we don’t usually do it, but you’ve got to run the ball and we think in those situations John gives us the best chance and you’ve got to run the clock like we did. In the two-minute (drill) we were trying to push it down field. …It could’ve worked. We throw the ball to Kenny and wherever he was, the 10-yard line. We would have had that last timeout with three seconds for a chance to win the game. You want to conserve timeouts as long as you can in situations.”

Plumlee was interjected with Corral throughout the game more than he has since the season opener against Florida. He threw one pass for seven yards and rushed for 48 yards on eight carries.

Corral finished with 154 passing yards and a touchdown while leading the team in rushing with two touchdowns and 88 yards on 10 carries.

For a second straight week the Rebel defense played much-improved from the first three weeks of the season. Auburn (3-2, 3-2) had three three-and-outs and were forced to punt four times.

Sam Williams got to Nix one for a sack and had three tackle for losses.

Ole Miss returns to the road next Saturday for a Halloween showdown in Nasvhille against winless Vanderbilt. Kickoff is set for 3 p.m. CT.