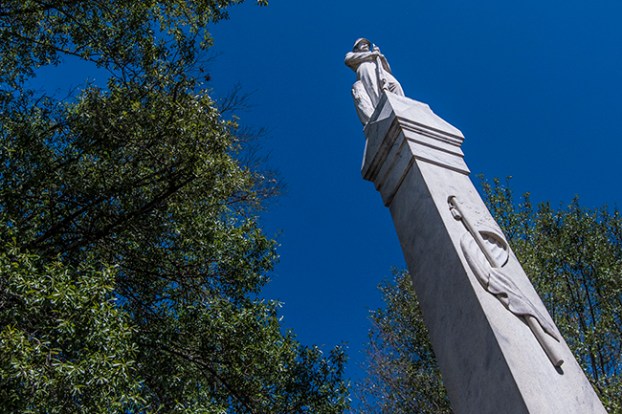 The Confederate statue overlooks the Square in Oxford, Miss. on Tuesday, October 3, 2017.

The issue between the City of Oxford and Lafayette County regarding who may own the land on which the Confederate statue resides has been set aside, for now.

The first vote occurred in an executive session of the Board’s Oct. 6 meeting, which was closed to the public. The motion to not pursue litigation was made by Alderman John Morgan and seconded by Alderman Jason Bailey. The motion passed 4-3 with Aldermen Janice Antonow, Kesha Howell-Atkinson and Preston Taylor voting in favor of taking the issue up in court.

Mayor Robyn Tannehill read a prepared statement during the meeting on Tuesday, stating the Board felt due to the lack of strong evidence of ownership, and to protect the relationship between the Board of Aldermen and Board of Supervisors, the City would not be taking the matter to court.

“This was not an issue instigated by the City of Oxford Board of Aldermen, but in response to citizen inquiries,” Tannehill said. “The Board of Aldermen believe that there is information that suggests the property on which the Confederate monument sits is questionable, but has no definitive answer to this issue. With no survey available, that the City has uncovered, and with notice from the Board of Supervisors saying that they are not willing to discuss the issue and provide additional evidence, this Board is only left with two options: Conclude that there is no definitive answer and move to others issues or the Board of Aldermen could bring a lawsuit to seek to have a court declare under the facts discovered that the property upon which the statue sits is the city’s.

Morgan made the motion to adopt Tannehill’s statement, which was seconded by Bailey and was unanimously approved by the Board.

Atkinson then made a motion to affirm the majority of the Board’s support in moving the statue to an alternate location had it been conclusively determined that it was on city property. Morgan then made a counter motion to table Atkinson’s motion, claiming Tannehill’s statement reflected the Board’s stance on the monument and did not feel a vote on something that may or may not happen should take place.

“I agree with the statement, but I just don’t think we should vote on something that might have happened,” Morgan said.

Morgan’s motion to table Atkinson’s motion passed with a 4-3 vote.

Prior to Tannehill’s statement, city attorney Pope Mallette presented research that he and Bart Robinson, the city’s chief operating officer, had compiled since the issue of who owns the property was brought to the city’s attention in June by a citizen’s inquiry.

Included in Mallette’s presentation was a map of the Downtown Square, which is on file with the Lafayette County Tax Assessor’s office, that showed an octagon boundary around the courthouse grounds that reflects what land the county owns. The sidewalk where statue sits is located just outside the octagon boundary, but Mallette stated the map is not an official deed.

Mallette also referred back to the documents from May 1868 where the Lafayette County Board of Police, the predecessors to the Board of Supervisors, conveyed “that portion of the County property known as the Public or Court Square” to the governing authorities of the Town of Oxford “in fee simple forever.” That is the highest level of ownership interested that can be held in property.

There were no records indicating the county had requested that land back from the city, but Mallette noted many of the oldest records on file were either damaged or lost.

At the conclusion of the discussion, Oxford resident Billy Crews was granted time by the Board to speak on the issue. Crews spoke to the four Aldermen who voted to move on to other issues and not press the matter into a court of law.

“The statue on our Square today is wrong, and we are culpable if we do not act and use our influence until it is relocated,” Crews said to the Board. “Oxford prides itself on being a leading Mississippi community. We should lead on this issue. You have an opportunity to make a legal and culture changing commitment.”

The Board of Supervisors have not made public any findings the county may have discovered in their own research regarding ownership of the property in question.