With a plan in place, coaches look toward amended… 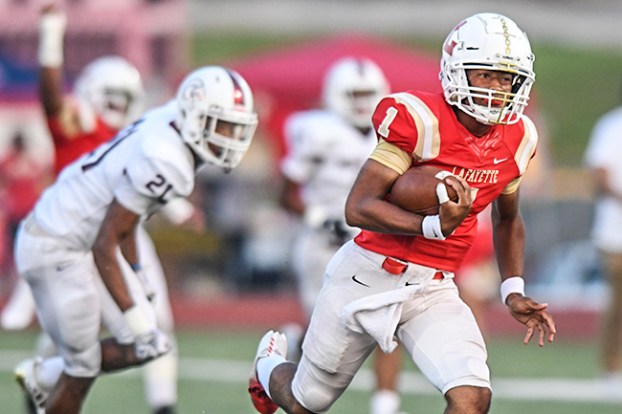 The football season is going to look very different in 2020 at all levels of play and the Mississippi High School Activities Association provided a glimpse at how different Friday nights in the fall might be.

Earlier this week the MHSAA released guidelines for all fall sports to follow in an effort to mitigate transmission of COVID-19 among the players, coaches and staff.

The guidelines provided for football make slight changes to how the game will be presented, but with teams already following many of the guidelines since resuming summer workouts on June 1 they may not notice a major difference come game time.

“There isn’t much difference to what we’ve been doing,” Lafayette head coach Michael Fair said. “One thing we’ll have to look into is hydration in a smart way and I think to do that you’re going to have to be creative with it. We used to have those water cows (on the sideline) and everybody just shared or water bottles and everybody shared. You can’t do that anymore.”

Players are not allowed to share water bottles as was common practice during a timeout with one bottle being passed around or used in a huddle as there was not much time to pass out several bottles. Another change in that same vein is the ability to extend timeouts by two minutes.

The team box has also been extended on both sides of the field from the 25-yeard line to the 10-yard line to help with spacing and social distancing. The extension is only for players’ use as coaches must still adhere to the traditional 25-yard line boundary.

Locker rooms, and their size, will become an issue for coaches across the state as they will need to be large enough to use social distancing protocols and must be properly cleaned and sanitized prior to the visiting team’s arrival.

With the Commodores spending 80 percent of the amended regular season on the road, dealing with a locker room that is not theirs and out of their control is the biggest issue Fair and his staff will have to manage.

“On the road, which we’ll have to do a lot of this year, we may dress in shifts or skip lockers. Whatever it takes,” Fair said. “That’s something that we can can get there and assess the situation and just try and spread out the best we can.”

Depending on the destination of a given road week, Fair said player might put on some of their equipment ahead of time in case space might be limited at the visiting locker room but probably will wait until the team arrives to have the players put on the bulk of their uniform.

Facial coverings and masks are permissible for players to wear during the game. Fair said they have been using neck gaiters during summer workouts as a possible option for his players, who elect to use some form of face covering.

“We’ve been training and working out in (the gaiters) so I think we’ll continue to do that,” Fair said. “When we’re on the field it’s something that can be easily slipped up over your nose and mouth and can possibly pull it down between plays. That’s something that we’re looking at. I think once we put helmets on (Aug. 17) we’ll know more about that.”

The MHSAA also provided what they called on-site considerations for stadiums, giving the impression they are not opposed to fans attending games come Sept. 4. How many fans that might be will be determined closer to the start of the season.

Masks must be worn to enter the stadium and the home school must have hand sanitizing stations placed throughout the stadium. Concession stand workers must wear a facial covering and gloves and the press boxes will be less crowded this year with only a public address announcer and a clock operator allowed inside.

Getting the opportunity to have fans attend games is a positive for teams such as Lafayette that will only get to play in front of their home crowd twice this season.

“What I think the MHSAA is doing is smart. They’re putting guidelines out there, but I think we are a month away from knowing exactly what this is going to look like,” Fair said. “I think they’ll see what the climate is at that point and they’re not making any decisions right now that don’t have to be made. I don’t think they are opposed to fans at all, right now. The number of fans may be something they may look into and how that’s going to work. It’s something that’s definitely going to need to be addressed but I really appreciate them not making a decision on something that’s not really going to happen for another month.”

Preseason practice for football begins on Aug. 17 with Week 1 of the 2020 season beginning on Sept. 4. Lafayette opens the season at Horn Lake while Oxford travels to Grenada and Water Valley visits Baldwyn.