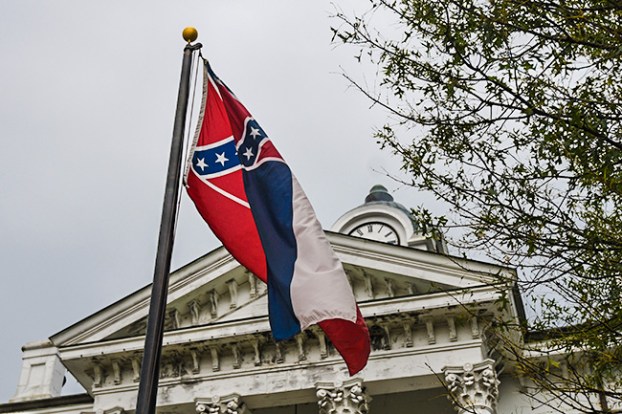 The Mississippi state flag flies at the Lafayette County Courthouse in Oxford, Miss. on Wednesday, August 30, 2017. The Mississippi Legislature voted to take down the current flag and appoint a commission to create a design for a new state flag to be voted on in November on Sunday. (Bruce Newman/Oxford Eagle).

Mississippi Legislature votes to take down the current state flag

History was made in Mississippi this weekend.

The state Legislature passed House Bill 1796, which removes the current state flag that features the Confederate emblem and allows a vote to take place this fall on a new design picked by a commission.

A final vote of 37-14 in the Mississippi Senate late Sunday afternoon was the final hurdle cleared in bringing down the controversial flag.

Earlier in the day, the Mississippi House of Representatives voted 91-23 in favor of passing the bill and sent it to the senate. Sunday’s margin was larger than Saturday’s vote of 85-34 in favor of the resolution to suspend the rules and allow both the House and the Senate to vote on removing the flag instead of a referendum.

Now, it is in the hands of Governor Tate Reeves, who must sign the bill into law. Reeves stated on Saturday that if the legislators could present a bill on his desk this weekend, he would sign it. However, reports surfaced on Sunday that Reeves will now take a few days before signing the bill.

An official statement from Reeves’ office was not provided at the time of publication.

Those appointments must be submitted by July 15, according to the bill. The commission will then have until Sept. 14 to come up with and submit a design to be placed on the ballot for the Nov. 3 general election.

If a majority vote is not reached in November’s election, the commission will then be asked to come up with another design to submit during the 2021 legislative session to be voted on in next November’s election, or in a possible special election if the House and Senate agree.

Mississippi will not have an official state flag until a new design is voted on with a majority vote.