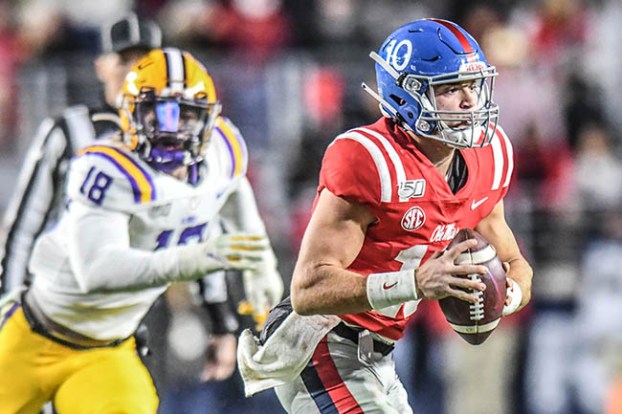 Mississippi quarterback John Rhys Plumlee (10) looks to pass against LSU at Vaught-Hemingway Stadium in Oxford, Miss. on Saturday, November 16, 2019. The loss of spring practices due to COVID-19 has stalled the quarterback battle between Plumlee and Matt Corral. (Bruce Newman, Oxford Eagle via AP)

Neither Plumlee nor Corral have advantage in “neutralized” quarterback battle

With the summer months in motion and the calendar getting closer to September, football coaches are normally beginning to evaluate key position battles.

Due to the COVID-19 pandemic and a loss of spring practices, the quarterback battle between John Rhys Plumlee and Matt Corral has turned into a stalemate by default.

Entering his first season at Ole Miss, head coach Lane Kiffin has not even seen his players take the practice field, with spring being cut short before it could even get started. What portions of the playbook the first-year coach and his new staff could install were at a minimum before campus closed down in mid-March.

“We had done the install meetings in the little time we’re allowed prior to spring ball, but obviously had not done much on the field,” Kiffin said during a zoom press conference last week. “There was no time where we were even allowed to have a ball with them. It’s one thing to know things mentally, but not be out there to know them physically. It’s very different.”

One of the key position battles people had their eye on this spring was set to be between Plumlee and Corral. The two shared the field during the 2019 season, with Plumlee gradually becoming the starter and Corral coming in as a situational player, minimally.

With Kiffin, who has been a quarterbacks coach and an offensive mind at his previous stops prior to coming to Oxford, the quarterback battle was set to start with a clean slate with spring practices and the annual Grove Bowl scrimmage. Neither of those things happened.

The focus is on Plumlee and Corral, but sophomore Grant Tisdale was expected to get his fair look upon returning to the program after entering the transfer portal for a period of time this past winter. Tisdale would have more than likely gotten most of the reps as the backup to Corral this spring, with Plumlee playing across campus at Oxford-University Stadium with the baseball team.

“It certainly doesn’t help,” Kiffin said of the time lost with his quarterbacks. “We try to be positive, but you have to be factual also. That hurt us in evaluation. John Rhys Plumlee probably would’ve fallen behind, I assume, just off of baseball and the amount of time for us to evaluate and work with him and throwing the ball in the system. In that sense, it probably neutralized it in terms of those two with no one having an advantage.”

Due to the shutdown, Kiffin even alluded to the potential of his system being toned down due to the lack of time he and his staff may eventually get with the players before games start this fall.

Continuity, or lack thereof, was also something Kiffin hinted at when discussing the possibility of having to alter his playbook compared to if he was returning for another year at Florida Atlantic instead of entering his first year as a head coach in the Southeastern Conference.

“I definitely think so, and this is first-year staffs versus everybody else,” Kiffin said. “If this was still going on while I was still at FAU, there would not be a whole lot of concerns with having to miss spring. With all of the returning players and everything, I really wouldn’t be worried about it. People think, well, if you miss spring, how can a guy play if you’re a returning player? A lot of times you have 15-20 guys out in the spring for surgeries, then guys have a great year the next year and nobody remembers if they miss spring ball. But that’s because they were already there. They knew the system and had seasons playing in the system. This is much different with a first-year staff. There may have to be limits on the playbook.”

When it comes to players who had offseason surgeries, Kiffin said he relied on his training staff, but admitted tracking progress was “difficult” with everyone spread out and not centrally located on campus. Rehabs were conducted through Zoom instead of at the athletic facility.

“I’m sure some kids are a little set back because of that,” Kiffin said. “I can’t give much information on them, because we’re not allowed to work with them yet or even get reports on them from our strength staff.”