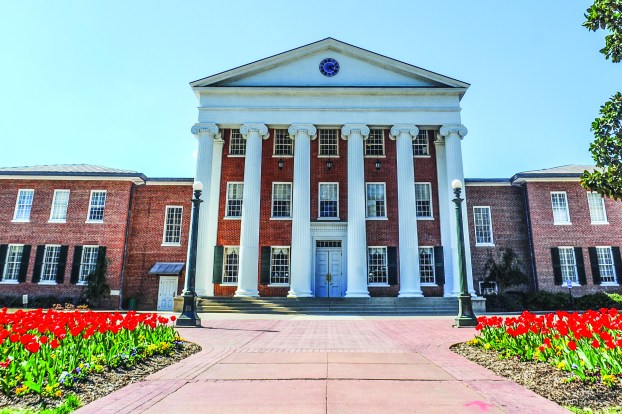 The Lyceum on the Ole Miss campus. (Photo/Bruce Newman)

The University of Mississippi took another step on Tuesday toward making its goal of resuming in-person classes by the fall semester a reality.

Chancellor Glenn Boyce announced the formation of the Future Planning Task Force to develop an operational framework for the fall semester, which could include the semester looking different from normal.

“As I’ve noted previously, we look forward to welcoming students back to campus for in-person instruction for the Fall 2020 semester on the Oxford and regional campuses,” Boyce said. “Our return to campus will include a series of protocols and parameters designed to protect the health of our community.”

What those protocols might be are yet to be determined, but Boyce previously stated he intends to announce Ole Miss’s plans for the fall semester by no later than June 30.

The Task Force is comprised of nearly 50 administrators, faculty and staff who have led various aspects of the University’s response to COVID-19 since campuses shut down in March. Five subcommittees have been formed within the task force, with wide representation across the campus to help develop the framework, monitor the variables that evolve daily and develop the best recommendations.

“These subcommittees will give close consideration to the guidance outlined by federal, state and local government agencies that are advising us on how to resume operations with proper safeguards,” Boyce said. “They are also communicating with the Mississippi State Department of Health and local health officials. … The protocols will determine what classes and other campus activities look like in the fall.”

The Institutes of Higher Learning previously announced its Safe Start Task Force last month, with two representatives from each of Mississippi’s eight public universities. Sparks and Pegues are UM’s representatives on the IHL’s task force, which is developing broad system-level parameters to guide institutional planning for the fall semester.

On Thursday, the IHL’s Board of Trustees passed a resolution stating their intentions that the campuses of all eight public universities make plans to resume traditional operations on their campuses for the fall semester. The resolution includes direction to the universities to plan to offer as many in-person classes as possible while also taking into consideration guidance from the federal government and the MSDH while complying with any executive orders from Governor Tate Reeves.

“Providing a safe environment for all students and employees is paramount,” said IHL Board president Dr. Ford Dye. “We urge the universities to take prudent precautions in planning for resuming traditional operations and make adjustments as needed, based on recommendations from health experts.”

While Ole Miss has yet to announce their plans for the fall semester, other Southeastern Conference Schools have already announced theirs. The University of South Carolina announced on Monday they will cancel their scheduled fall break and halt in-person classes on Nov. 24 to limit potential spread of COVID-19. Notre Dame also announced a similar plan in an effort to guard against a second COVID-19 spike this fall.