Gray Spencer out of hospital, targeting a return home… 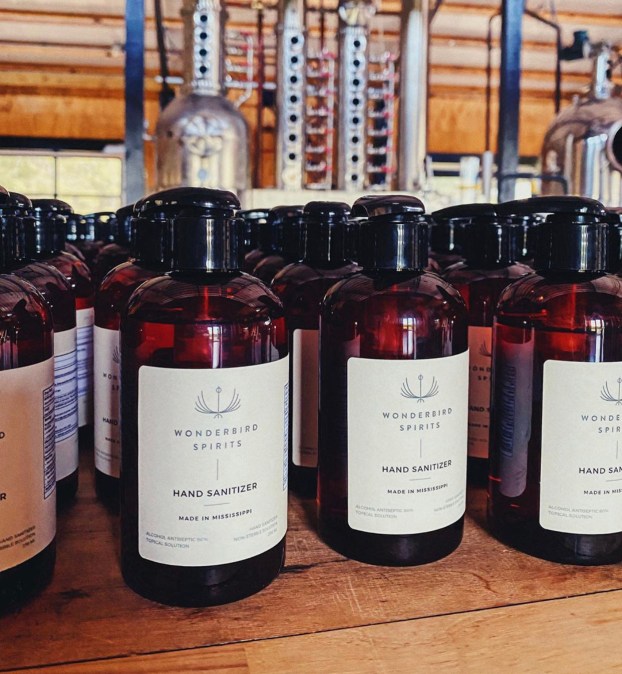 Wonderbird Spirits Gin Distillery is making hand sanitizer for first responders and health care workers. They plan to make it availiable for the public to purchase in the near future. (Wonderbird Spirits/Instagram)

When the COVID-19 pandemic hit the United States, everyday essentials became such hot commodities they rivaled the popularity of the must-have toy at Christmas.

Hand sanitizer and toilet paper became premium materials and could not stay on the shelves long enough to meet the demand. Because of that, distilleries around Mississippi immediately shifted their operations from making vodka and gin to becoming hand sanitizer manufacturing plants.

The switch was essentially overnight, and for Wonderbird Spirits in Taylor, the decision to do their part to help their community was immediate. However, they had to do their homework first to get it right.

“This is not something you would ever want to get wrong,” said Rob Forster, co-owner of Wonderbird Spirits. “We needed to make sure we had a good handle on what the Feds were expecting. We are kind of a heavily-regulated industry, because of the nature of what we produce. We had label guidance from the Feds on what we needed to put on a disclosure, essentially, at first.”

Once Forster and his business partner, Chand Harlow, understood everything that needed to be done correctly, they began making the hand sanitizer. Production was halted on their grain-to-glass gin, and shifted to solely manufacturing the eight-ounce bottles of hand sanitizer on April 2.

Knowing sanitizer was vanishing off store shelves at a rapid rate, Forster said he wanted to make sure those fighting COVID-19 on the front lines could have an adequate supply.

Wonderbird has given sanitizer to between 50 and 100 healthcare facilities and first responders since they began production. Some medical facilities and doctors offices have even brought their own bottles to the distillery to fill up.

“Obviously, we have a very serious medical problem going on,” Forster said. “Because we’re not a massive distillery, we have limited amounts of alcohol so we thought, ‘Let’s make sure this gets to the most important points first.'”

Once they feel the demand for sanitizer at those facilities has been met, Wonderbird intends to begin making their sanitizer available to the community and then to rest of the state through their website. Wonderbird is still hearing from “dozens” of people a day asking for sanitizer, according to Forster.

A date to begin selling to the public is not official, but Forster said they are looking at maybe Friday, April 10. A potential price for the bottles could be $9, but Forster said nothing has been finalized and the public should not be worried about breaking the bank to purchase it.

“This is not really profit-motivated as much as it is a civic duty,” Forster said. “We’re offering that stuff to first responders at basically at-cost, and when we sell to the public, it’s going to be an extraordinarily modest margin. This is not really a business thing. We’re in strange position where what we produce at the distillery is in real need right now for everybody. We’re honored to play a small role.”

For news on when the sanitizer will be available to the public, follow Wonderbird Spirits on Instagram.