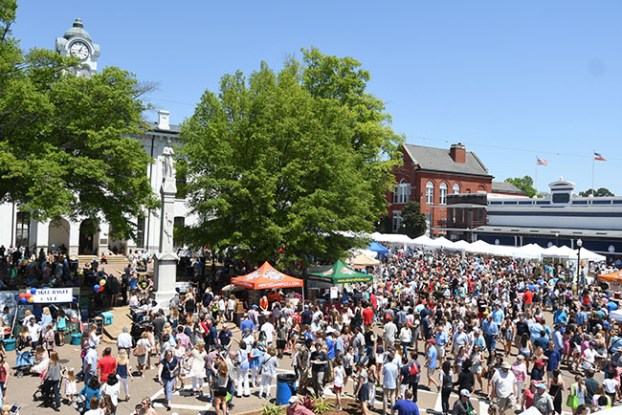 The Square is packed with people attending the 23rd Double Decker Arts Festival in Oxford, Miss. on Saturday, April 28, 2018. The Oxford Tourism Council voted on Thursday to postpone this year's Double Decker festival to Spring 2021 due to concerns over COVID-19. (Bruce Newman, Oxford Eagle via AP)

One of the biggest spring events in Oxford, Mississippi and the Southeast will not be taking place next month.

Visit Oxford announced Wednesday that the 25th Annual Double Decker Arts Festival has been postponed. It was scheduled for April 24 and 25.

“Our top priority is the safety and health of our patrons, artists, guests, staff, vendors and community,” a statement posted to Visit Oxford’s social media page read. “We are committed to rescheduling this beloved event and will have a new date to look forward to in the coming weeks.”

Double Decker was one of the remaining events that had not yet been rescheduled due to the COVID-19 pandemic.

This year’s music portion of the festival was scheduled to be headlined by Rainbow Kitten Surprise and feature St. Paul and The Broken Bones, Toots & the Maytals, The War and Treaty, Chris Knight, Maggie Rose, The Sensational Barnes Brothers and Chadwick Band.

Drew Holcomb and the Neighbors were scheduled to headline Friday, April 24 along with The New Respects and Sweet Crude. Friday’s portion was presented by Thacker Mountain Radio Hour, which was also scheduled to air that week’s broadcast from the festival’s main stage on North Lamar Boulevard.

“When this terrible time passes, we will be more excited than ever to see you in Oxford and celebrate the 25th anniversary of the Double Decker Arts Festival,” the statement continued. “We encourage all to adhere to the CDC guidelines to prevent the spread of COVID-19.”

On Sunday, the CDC amended their guidance to discourage any public gatherings of 50 people or more, and earlier this week, President Donald Trump discouraged any mass gatherings of more than 10 people in one place.