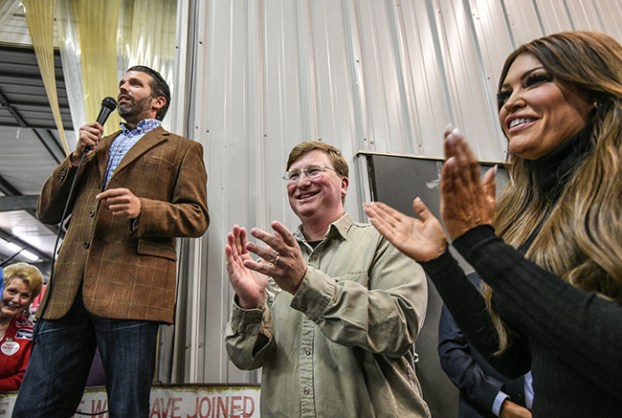 The Mississippi gubernatorial election is 12 days out, and Republican candidate Tate Reeves was in Oxford on the campaign trail.

Joining him on Thursday evening at Johnny Morgan’s Shop in Oxford was a special guest – Donald Trump Jr.

Reeves was not the only candidate in the Nov. 5 election in attendance at the 2019 Good Ole Boys and Gals rally, but he was certainly the headliner. A handful of other candidates running for state legislative positions spoke for 3 to 4 minutes apiece on Thursday night, before Reeves and Trump Jr. took the stage, speaking for a combined 45 minutes. Democratic gubernatorial candidate Jim Hood was not in attendance.

“It’s an important election. We as Mississippians have a choice,” Reeves said. “We’re going to run this state like Donald J. Trump is running America… and the reality is, we’re going to elect Republicans up and down the ticket.”

During his 10-minute speech, Reeves spoke on his opponent’s and the Democratic party’s views on abortion, taxes, unemployment rates and out-of-state campaign funding.

By comparison, Reeves stated Hood’s plans for new state programs would lead to higher tax rates. Throughout his campaign, Hood has been outspoken for universal preschool, teacher pay raises and fully funding the state education formula, which has only been fully funded twice since its inception in the 1990s.

Hood has also proposed raising the state gas tax, which has not been adjusted since the 1980s, to fund statewide infrastructure projects.

“We can elect someone who’s for cutting taxes and letting you keep more of your money, or we can elect someone that’s already proposed $941 million in new spending, which is going to lead to new taxes,” Reeves said. “The liberal Democrats in Washington believe that government is entitled to every single penny you make, and every single penny you keep you should be thankful for.

“We, on the other hand, believe that government doesn’t have anything that they don’t take from anyone else.”

Although he recently released a campaign ad promoting his own plan for teacher pay raises and education improvements in Mississippi, Reeves did not relay that message in his Thursday night speech.

Trump Jr. then took the stage following an introduction from his girlfriend, former San Francisco Assistant District Attorney and former cohost of “The Five” on Fox News, Kimberly Guilfoyle. Guilfoyle kissed Trump Jr. as he stepped onto the platform, which prompted him to make a joke relating to the “Me Too” movement.

“Notice she went in for the kiss, not me,” he said. “I know this is Mississippi, but I’m from New York and I don’t want her to ‘Me Too’ me.”

Addressing the crowd of approximately 350 people, Trump Jr. said he was exceptionally proud of the parents who brought their children to the event.

“I like to see these young kids out here learning a little bit about politics and fighting for conservative values,” Trump Jr. said. “We have enough young kids that are brainwashed by that liberal crap that they’re spreading up north, so it’s good to be here.”

Trump Jr. made a point to emphasize how he relates to the working man in spite of his family’s wealth. Other talking points included socialism and the Democratic agenda, China and how Reeves falls in line with the “MAGA agenda.”

He also blasted mainstream media as the “marketing division” of the Democratic Party.

Trump Jr. compared Mississippi to its neighbor to the west, Louisiana, painting the Pelican State as an economic failure under Democratic Gov. John Bel Edwards.

“We need guys who are willing to step up like Tate (Reeves). Guys who will fight for the MAGA agenda,” Trump Jr. said. “We don’t want Mississippi to end up like your neighbor, run by a democratic governor, who’s the only state in the Trump economy losing jobs. You want that here? You want to take years of success under Gov. (Phil) Bryant and give it all back? Because that’s what will happen.”

Trump Jr.’s questions were met with the crowd booing and shouting, “No!”

Leveling with the crowd, Trump Jr. made an appeal to the average Mississippian. He acknowledged his family’s wealth, but stated that he, and his father, are able to find common ground with the “hardworking men and women of this country” because and in spite of their wealth.

The reason, he said, is because of the amount of time he and his father spend in the American heartland.

President Donald Trump will join Reeves on the trail next Friday, Nov. 1, in Tupelo for a campaign rally at Bancorpsouth Arena.

The 2019 Mississippi general election will take place on Nov. 5.