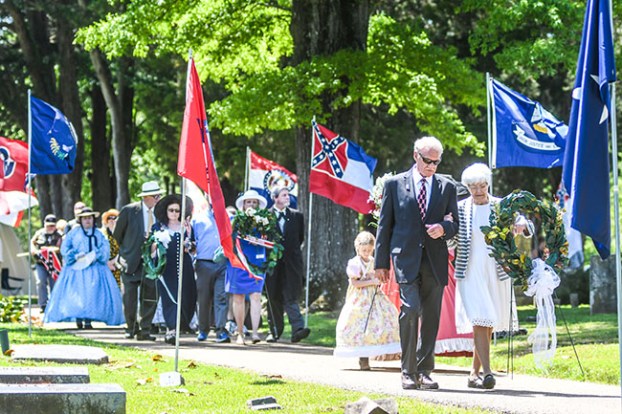 A procession walks to place wreaths at the graves of two University Greys where headstones have been recently installed, at St. Peter's Cemetery in Oxford, Miss. on Sunday, May 6, 2018. University Greys Camp 1803 Sons of Confederate Veterans recently installed new headstones at the graves of Mitchell Adrian Reynolds and William J. Burkhead. (Bruce Newman, Oxford Eagle via AP)

The headstones were paid for and donated by the University Greys Camp 1803 Sons of Confederate Veterans after they discovered the original tombstones were broken and deteriorating.

There are approximately 60 Confederate soldiers buried in the old Oxford cemetery.

Several members of Camp 1803, and other Sons of Confederate Veterans groups from around Mississippi attending the ceremony, dressed in period clothing – the men in replicas of the University Grey uniform and the women donned high-necked dresses with large hoop skirts.

Bluegrass bans Alan Sibley and the Magnolia Ramblers played traditional Southern and gospel tunes to kick off the event.

Larry Mardis, commander of University Greys Camp 1803, welcomed the group and provided some history of several Civil War-era Oxonians now buried in there.

“Cemeteries are part of your history,” he said. “You need to know who is buried here to know your history.”

The guest speaker, “Pres. Jefferson Davis,” portrayed by Wes Teel, said it’s important to remember the names of the past and their history.

William J. Burkhead, 24, a local farmer, enlisted as a Confederate soldier with the University Greys in April 1861 on the north-side of the Square. He came home to Oxford in September 1861 and died soon after from an unknown “disability.”

Mitchell Adrian Reynolds of Oxford, 19, was a student at the University of Mississippi. He enlisted the same day of Burkhead. He died of typhoid fever in Lynchburg, Virginia in August 1861 and his body was brought home to Oxford.

“Today we come to remember these boys. We do remember. We have not forgotten.”

Miller also offered thanks to any veterans who attended the events for their service.

“I can’t come here and remember these Confederate soldiers without recognizing our living veterans,” he said.

The University Greys were Company A of the 11th Mississippi Infantry Regiment in the Confederate Army during the American Civil War. Part of the Army of Northern Virginia, the Greys served in many of the most famous and bloody battles of the war. Their name, University Greys, came from the gray color of the men’s uniforms and from the fact that almost all of the Greys were students at the University of Mississippi. After Gettysburg, the depleted Greys were merged with Company G, known as the Lamar Rifles.

Wreaths were placed next to the new headstones and the ceremony concluded with the group singing, “Dixie.”