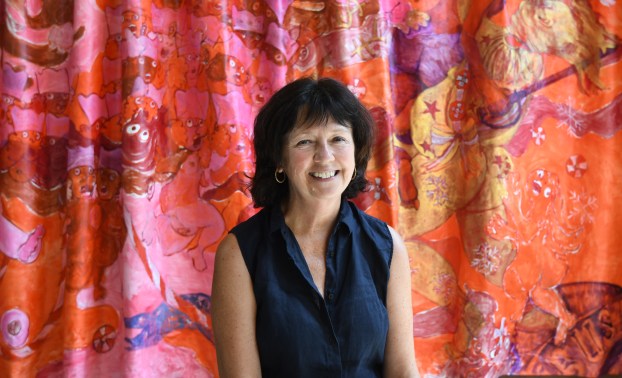 Laura Elkins’ new painting installation “America Selfie” is timely, but her hope is that it transcends 2017 and the current political climate.

The artist, who was raised in Oxford, but is currently based in Washington D.C., is no stranger to mixing politics with vibrant and sometimes visceral paintings.

A series of First Lady portraits she did entitled “Summer in the City,” for instance, juxtaposed the famous women with handguns as they partake in warm weather activities like tennis and swimming.

“It’s that idea that in America, you have to watch your back all the time,” Elkins said as we chatted in the Sally McDonnell Barksdale Honors College on the Ole Miss campus, where “America Selfie” is currently housed.

From a young age, Elkins was always intrigued by art. She first gained experience from painting instructors in Oxford and still remembers her school teacher Lynton Dilley who showed her how to draw homes to scale.

Elkins would go on to get a degree in architecture from the University of Virginia.

When she left Oxford for college, Elkins says that while she was there, she rarely spent time “trying to develop a style.”

“When I got out of college, I thought, ‘how am I going to paint?’” the artist remembered. “For me, it had more to do with what I thought life was about. I came back (to Oxford) after college and I got a studio, but I probably spent more time wandering at the stacks at the university library and reading. It all started from there.”

Elkins emphasized that she wants her work to be, perhaps above all, “aesthetic.”

“But aesthetic — in the fundamental meaning of the word – is to wake up,” she added. “That’s what I’m going for. I want work that will wake you up. So, whether you know anything about art or whether you know a lot, that it will physically draw you in.”

Her installation “America Selfie” encapsulates this idea perfectly. Four 12 foot paintings hang from the ceiling and distill recent political events using imagery that runs the gamut from the women’s marches earlier this year to Klan symbols to Picasso’s “Guernica.”

A central figure in the work is the female Freedom personification as she’s represented atop the Capitol Building in D.C.

“America Selfie” also references the Rape of the Sabine Women, an event from Roman mythology that has been interpreted from generations of artists from Edgar Degas to Peter Paul Rubens.

“It deals with all aspects of our culture, but the underlying drama or motivation is about the situation of women,” Elkins said.

Another obvious influence is the current presidential administration.

“The imagery that they produce is so rich and it lends itself well,” she said. “I don’t see this as necessarily anti-Trump, but more about American history. It’s looking at the whole picture and not just right now. I want to engage people right now. I hope to create a lasting work. American history is varied and disturbing. He’s not really an anomaly. There have been other presidents (like Trump), they just haven’t been as blatant or obvious. These things have been going on for a long time.”

“America Selfie” will be hanging in the Sally McDonnell Barksdale Honors College at the University of Mississippi until Sept. 29.