Oxford to add more meters on and around The… 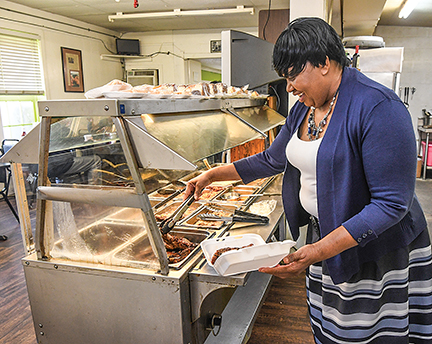 During Black History Month, on each Sunday, the EAGLE will feature a long-standing local business owned and operated by African Americans citizens.

When Joester Egerson Brassell, know by most as Mama Jo, opened her small restaurant on North Lamar, she only wanted to share her gift and God’s love with her community.

One could easily drive by Mama Jo’s Country Cookin’. There’s no garish sign out front. There are no florescent lights. There’s only a simple painted sign above the little restaurant that serves up a lot of good food in a place that feels like home.

“When I started this restaurant, my goal was to meet souls,” Brassell said. “It wasn’t about money or trying to become famous. My thought was cooking was my gift from God so I was gonna take my food and touch people’s souls.”

Brassell’s restaurant has been in the same place for 12 years, just northwest of the North Lamar Boulevard and Molly Barr Road intersection, known locally as Three-Way. Her simple, home-style soul and country cooking has not only filled the tummies of local people, but news of the great food caught the attention of national foodies, including Travel Channel’s Bizarre Foods’ Andrew Zimmern, who shot an episode of his show at the restaurant in 2012.

Zimmern shared a meal with his with friend, John T. Edge, a food writer and commentator and the director of the Southern Foodways Alliance, and a six-person filming crew. They munched on a buffet of home-cooked Southern food including fried cornbread, smothered pork chops, neck bones, Rotel chicken, catfish, turnip greens, boiled okra and other veggies.

After the meal, Zimmern tweeted that his lunch at Mama Jo’s exceeded his expectations, calling it “great food.”

Since then, there has been a documentary filmed at the restaurant, which is completely run by family members.

“I get calls all the time from TV, radio, who want to come in and sit and talk and interview me now,” Brassell said. “When people come there, it’s more than about food. There’s the spirit of God here and they feel that.”

Brassell said despite the growing popularity of the restaurant, she and her husband, Bo, have no immediate plans to expand.

Brassell learned to cook by watching her mother. At about 5 years old, she baked her first cake and fried her first chicken. She cooks from the heart with a little help from above, she says.

“My cooking is a gift from God,” she said. “It’s spiritual. You know how people have gifts, well, I was gifted with cooking.”

She doesn’t use cookbooks. All of her recipes are in her head and she makes sure each are executed properly in the restaurant, the same as any good chef.

“I cook by taste and smell,” she said.

Before opening Mama Jos, Brassell cooked for the Alpha Omicron Pi and Kappa Alpha sororities on the University of Mississippi campus and at the Citgo Service Station on the Square, where the Chancellor’s House hotel is currently located.

“They had a deli in there in back and I used to cook there,” Brassell said.