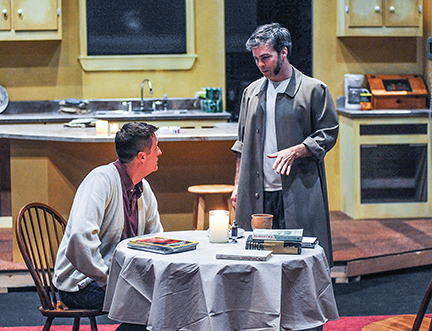 Bruce Newman Greg Earnest, right, and Brian Whisenant rehearse for Theatre Oxford’s production of Sam Shepard’s “True West” at the Powerhouse Community Arts Center. The play will be performed Friday and Saturday at 7:30 p.m., and Sunday at 2 p.m.

A Sam Shepard fan, Kate Hooper was thrilled when Theatre Oxford approached her to direct the upcoming Pulizer Prize-nominated play, “True West” that opens this weekend at The Powerhouse.

“I was delighted,” Hooper said Tuesday during rehearsal.

“True West” is about the sibling rivalry between two estranged brothers who have reconnected after about five years. Forced to confront the worst of each other, the two brothers wrestle — figuratively and non-figuratively — with their own interpretations of the “American dream.” The play was a finalist for the Pulitzer Prize for Drama in 1983.

The show will run at 7:30 p.m. Friday and Saturday and 2 p.m. on Sunday and is recommended for an adult audience.

Seating is limited to 75 per show due to the arena, pit-style set up of the stage, which has been masterfully crafted in the middle of the playhouse. The audience will sit around the stage, allow for complete emersion into the life of Austin and Lee.

“When I reread the play, I immediately saw a fighting pit, an arena, where people are ringside,” Hooper said.

Hooper described the play as dark, funny and, at times, frightening as the audience is thrown into the midst of sibling rivalry.

“It’s true humanity,” she said. “People who enjoy watching stories based on humanity and raw human emotions would enjoy this show. Someone who likes Faulkner, I think would really enjoy it.”

Greg Earnest plays Lee, who comes back home after going to the desert to find their father. He is the older brother and distracts Austin from writing screenplay. Brian Whisenant plays Austin.

Earnest said his character, Lee, is honest and doesn’t deny himself anything.

“He dropped out of school, was forced to be homeless pretty much,” Earnest said. “It’s a sad existence, but it’s one he has chosen to live.”

Earnest, who has been in several Theatre Oxford productions, said this was his first time acting with the arena-style stage.

“Normally, you have left stage, right stage,” he said. “Now we have no left or right. It’s all one space with one exit.”

Whisenant said his character is tightly wound and he’s enjoyed portraying how Austin unravels throughout the play.

“I can relate,” he said. “He feels this is his last chance and everything is at stake … he’s completely vulnerable emotionally.”

Susan Hickman plays the mother of Lee and Austin. She arrives home from a trip to Alaska to find her house trashed.

“She’s very disappointed in her boys,” Hickman said with a chuckle.

Hickman said this was her first play with Theatre Oxford and has been impressed with the acting and direction.

Also appearing in the show is Logan Little as Saul, a movie producer.

Tickets cost $15 for the general public and $10 for Theatre Oxford members, students and senior citizens.