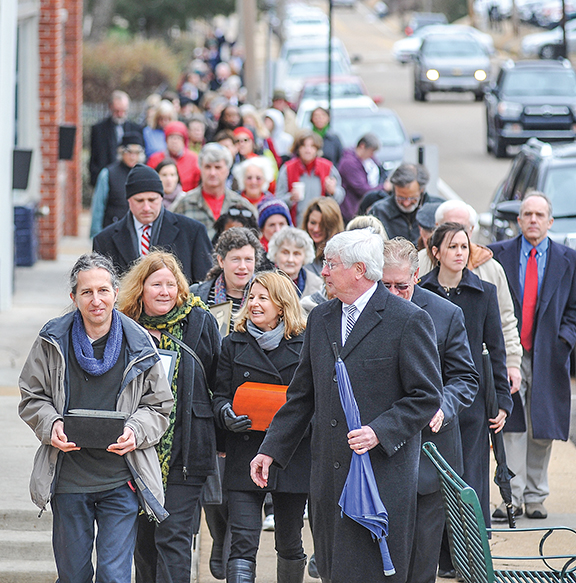 About 125 people walked from Oxford-University United Methodist Church to Oxford Memorial Cemetery in memory of Al and Becky Moreton in Oxford, Miss. on Monday, January 25, 2016. The couple, who were known throughout Oxford in part because of their walks around town, died in a car wreck last week.

Making downtown Oxford a place everyone could enjoy, whether on foot, bicycle or in a vehicle was a goal of Becky Moreton.

she was on a constant crusade to make sidewalks and paths safe in the downtown area, whether that meant pushing for new pedestrian crossing lights at South 9th Street or sidewalks leading to neighborhood parks.

Moreton, 78, and her husband Al, were killed in a car crash last week. A couple, who spent hours a day waking

around Oxford, dying in a car wreck has been hard for those who knew them to grasp.

Becky was a member of the Oxford Pathways Commission for several years. Her main goal was to find ways to make Oxford more pedestrian friendly.

On Monday, the couple was honored during their funeral service. Their family asked the community to join them on a walk from Oxford-University United Methodist Church to Oxford Memorial Cemetery as they carried their ashes through the couple’s beloved downtown Square one more time. More than 120 people attended the walk, along with a few furry friends.

Tom Sharpe brought his cat Rudy to the graveside service.

“Every day, Becky and Al would walk by, sometimes once or twice a day, sometimes together … they if they didn’t see Rudy they called for him,” he said. ‘They were a part of our daily routine that will now be very much missed.”

Later on Monday, during the first Pathways Commission meeting since Becky’s death, the somber meeting kicked off with a discussion on how they could memorialize Becky and all she has done for Oxford.

Some suggestions included renaming the Rail Trails after her or some park benches on the Square. Some included naming a new park after both her and Al that is planned for where the old Station No. 1 firehouse exists on the corner of North Lamar Boulevard and Price Drive.

“Becky would have been about action, about getting something done,” said Commission Chairwoman Kate Kellum. “Not about a name somewhere, although we do intend to do that as well to honor her memory.”

Kellum suggested doing an annual walkability study in Moreton’s name which would be done by either local volunteers or outside professionals who would walk around Oxford and label problem areas and list things that should be corrected.

“We know everything wouldn’t be fixed at once,” Kellum said.

The information could be made into “Becky’s List” that would be provided to city officials. A place could be made on the city’s website for residents to add to Becky’s List when seeing something that should be corrected.

The commission agreed to ask the Moreton family for Becky’s notebook that had a long wish list of road and sidewalk projects she wanted to see done in Oxford and go from there. A definite plan is expected to be approved at the commission’s next meeting in February.

Mayor Pat Patterson stopped by the meeting to tell the commission “there was some money available” for any capital project they selected to be named after the Moretons.