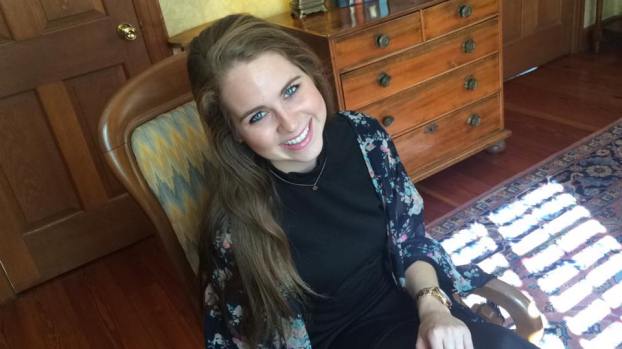 Submitted photo Shelby Sansone is pursuing a degree from the University of Mississippi’s journalism school and is getting involved in the profession through memberships and internships.

Shelby Sansone, 21, has dreamed of becoming a reporter since childhood. Now she’s pursuing that goal at the University of Mississippi’s Meek School of Journalism.

“I chose journalism because it’s what I’ve wanted to do my entire life,” she said. “I can’t imagine doing anything else.”

Sansone has been an active member of News Watch, a campus television program, where she served as producer, anchor and reporter. She left at the end of last semester, but now works for UM Communications.

She has also been part of the Society of Professional Journalists chapter on campus since her freshman year, and this year serves as vice president of the organization.

Sansone leads meetings, runs fundraisers for the chapter and writes about events.

“Students who get involved in the opportunities to do pre-professional work tend to learn more than those who stick with just class,” said Wenger. “Because they know more and are able to do the job that they are going to do in paying careers, they are a benefit to the school, because they are helping further the communication of the school. As a person working in UM Communications, she is helping get the word out to people who care about the university.”

“I loved it,” she said. “It exceeded all my expectations.”

The conference takes place annually at various locations, and brings together members of the society from all over the country.

Wenger also attended the conference, a trip she makes every year to keep up with what is happening in the journalism world.

“You get a chance to see what the industry is wrestling with in terms of challenges and opportunities,” said Wenger. “The conference reveals the new skills required to do the job of a journalist in this day and age.”

This year the conference took place in Orlando, and Sansone sought out advice from top journalists at CBS, CNN, News 4 (WOAI) San Antonio and other top news stations nationwide.

She brought her work to the conference hoping to get critiques, and gathered an array of reviews. Sansone learned a lot from the conference, but not all feedback was expected.

“It was kind of a shock to hear the critiques I got,” she said. “I need to work on my hand placement.”

This, however, was not the biggest surprise.

“The one that shocked me the most was actually that I have a Southern drawl,” she said. “I have always been told I do not sound Southern in Oxford, so that was weird.”

Though she gained a few negative critiques, she gained many positive reviews.

“I was talking to a San Antonio news director and showing her my reel,” she said. “San Antonio is a pretty big market, so I was not expecting to hear a lot of good things from her.

“Surprisingly enough, she actually sounded pretty amazed at my storytelling skills, which gave me a huge confidence boost after all those critiques. I felt much better, and that has given me a new sense of motivation that I had not felt before.”

Though Sansone gained mixed feedback, she knows all the advice will pay off in the end.

“All these things are definitely going to help me improve myself, so I am excited to use their advice,” she said. “I knew it would not all be positive. I actually hoped it wouldn’t because then I wouldn’t have gained anything.”

Wenger believes the more advice you get, the more you know.

She said hearing a different point of view in the classroom is crucial to growing as a journalist.

“Meeting people and talking with people who work in the industry gives you an opportunity to test everything you have learned in school, so you can get more than one perspective from your teacher, see what other points of view there are for how to be a good reporter, and how to get your career jump-started.”

Sansone’s goal is to become a reporter when she graduates.

“It’s awesome to know that the stuff I learned at News Watch will help me if I want to be a reporter or in public relations,” she said. “I have no idea where I will end up, but I am really excited to find out.”

Sansone hopes to work in Nashville after spending time in smaller markets.